School of Computing and Information Sciences

School of Computing and Information Sciences

The School of Computing and Information Sciences (SCIS) had a very eventful year in 2013-2014. SCIS is one of the largest computing programs in the country, and enrollments have grown tremendously over the last five years. According to the 2013 edition of American Society for Engineering Education (ASEE) Profiles of Engineering & Engineering Technology Colleges, the School awarded the seventh most Computer Science Degrees) in the United States. In the Florida State University System (SUS), we are the only university that offers both a B.S. and M.S. in both CS and IT. We continue to lead the nation in training Hispanic Ph.D. students. After being ranked No. 1 among all the state universities, we continued the second year of a three-year $7.5M award from the State’s Information Technology Performance Funding program. Our students, faculty, and alumni had significant accomplishments in the last year. The School continued the very high level of external funding that was achieved in the previous four years, exceeding four million dollars for the sixth straight year, including diversification into funding from the U.S. Department of Transportation for the first time, and continued to make significant progress in increasing entrepreneurship and technology transfer activities.

Our program, ranked No. 1 among all the state universities, continued the second year of a three-year $11.25M award from the State’s Information Technology Performance Funding program. This ranking was made possible by our School’s strong relationships with the Information Technology industry and recognizes our continued success in computer science and information technology education. Our School also partnered with the University of Central Florida and the University of South Florida to win a $4.9M Targeted Educational Attainment (TEAm) grant, funded by the Florida Legislature and approved by Gov. Rick Scott during the last legislative session. Through this program, which includes $1.53M to FIU, consortium partners will share best practices, policies and programs to maximize career-readiness of Computer Science and Information Technology Students, particularly among under-represented and limited-income students. Planned activities include enhanced predictive analytics to better track students’ degree progress, more targeted support through mentors and advisers, and closer partnerships with local companies to open up more internship or practicum opportunities.

Academically, we have experienced a continued explosion in our undergraduate enrollments, with both the B.S. in CS and B.S. in IT programs boasting over 750 majors in fall 2013. We graduated more than ten Ph.D. students for the first time, over 70 M.S. students, and both faculty and students received accolades from external sources for their scholarship and leadership.

Our School has reached a high sustained level of research and scholarly activity, and is now taking the next step towards prominence by competing for and winning very prestigious national and international awards, and in recruiting outstanding faculty. We recruited a new faculty member from a top-20 ranked department (UIUC) who joined us in 2013-2014; we have recruited two new faculty members from MIT and Cornell, who will join us in 2014-2015.

FIU SCIS faculty and students have recently been recognized for excellence:

The School has also continued its efforts to engage the community and to have significant impacts in technology transfer and entrepreneurship. Through the National Science Foundation’s Partnerships for Innovation-Accelerating Innovation Research (PFI-AIR) program, led by Dr. Naphtali Rishe in collaboration with other researchers from the School of Computing and Information Sciences, the College of Engineering and Computing, and the Herbert Wertheim College of Medicine, researchers are developing academic innovations and then translating that research into viable products for industry. We continue to build a new research consortium, the Cyber Infrastructure Education and Research for Trust and Assurance (CIERTA) consortium, which will investigate ways to make cyber-infrastructure that is secure, trustworthy, and dependable; see http://cyber.cs.fiu.edu. We continue our solid partnership with MDC-EM department through our Business Continuity Information Network led by Shu-Ching Chen and Steve Luis. Additional achievements in this area are described in a separate section, below.

SCIS continues to make excellent progress in its research activities maintaining its funding at a very high level. At $5,019,121, the School’s external research funding (Direct Awards) exceeded $4M for the sixth year in a row. The income from foundation and auxiliary accounts was $688K for a total of $5.71M external funding in addition to the State’s $3.75M Information Technology Performance Funding award and $1.53M Targeted Educational Attainment (TEAm) award made this fiscal year. These gifts include donations from IBM, Kaseya, TCL Research America, Xerox, and Intel. Faculty publications were at an all time high in both quantity and quality; SCIS had a record year of research publications, including 8 books, 13 book chapters, 58 journal papers, and 131 conference proceeding papers in top venues. SCIS faculty members Kandel & Rishe, Liu, Ren, and Carbunar each won best paper awards at top conferences this year.

IP Disclosures and Patent Applications: Our faculty and students have continued translating their research into technologies, filing six patent applications this year:

One patent was granted this year: the Communication Virtual Machine, which aims to allow users to execute communication-intensive models.

FIU Discovery Lab: Law Enforcement/Telebot Project: The FIU School of Computing and Information Science’s Discovery Lab (http://discoverylab.cs.fiu.edu) is continuing its development of the TeleBot, a tele-presence robot designed for high crowd density urban environments. The TeleBot will allow disabled veterans to remotely interact with people in busy downtown areas, public events, sporting events, parades, fairs, parks, and schools. In November, the TeleBot was demonstrated at Miami’s first Mini Maker Faire. According to the Miami Herald, “Anthony Martelly, 9, could hardly contain his excitement as he and his mom, Amorette Speaks, waited for a demonstration of ‘Hutch,’ Florida International University’s 6-foot tall ‘telebot,’ who gave a show every hour. Steve Luis, a director with FIU’s School of Computing and Information Sciences, said Hutch was developed over the course of about 18 months in the FIU Discovery Lab, which is designed to tap creativity and encourage student innovation.” The full article is available at: http://miamiherald.com/2013/11/16/3758939/miami-maker-faire-draws-plenty.html

In February, the TeleBot received world-wide press when it was demonstrated at the Miami premier of Sony Picture’s RoboCop film. Discovery Lab students and faculty demonstrated the TeleBot’s capabilities and were treated to an early screening of the Discovery Channel’s upcoming TeleBot feature segment. The demonstration was highlighted in three minute Fox News segment, available from http://discoverylab.cis.fiu.edu/index.php?document_srl=58216#0 . In March, the TeleBot was featured at FIU’s annual Torch Awards ceremony. In May, the Telebot was a feature attraction of FIU’s presence at the eMerge Americas Conference.

Dept. of Transportation funds $11.4 million UniversityCity proposal: In September, FIU received notice that the U.S. Department of Transportation will fund its $11.4M UniversityCity Prosperity Project via a TIGER award. As principal investigator, SCIS Professor Naphtali Rishe and a team from the NSF I/UCRC Center for Advanced Knowledge Enablement (CAKE), which he directs, will deploy an innovative Intelligent Transportation System to assist students, university staff, and community members to move efficiently to and through the FIU campus. The project, which was officially awarded on June 24, 2014, will support an innovative package of technology, streetscaping, and transit improvements to connect the City of Sweetwater with Florida International University. Together they will increase access to jobs on the FIU campus and link two portions of campus that are currently disconnected. TIGER funds will be used to construct a new pedestrian bridge over a busy arterial road. These infrastructure improvements will support the economic growth of a major public research university and an adjacent small city. See http://news.fiu.edu/2014/01/universitycity-a-plan-for-the-future-that-starts-today/73237

In fall 2013 the School embarked on a branding campaign. The goal of the campaign was to increase the awareness of the School’s brand within its own students and within the South Florida technology community and improve the appearance of the facility to reflect FIU and school branding.
To raise awareness in the technology community we have engaged in several outreach efforts reported elsewhere. The outcome for many of these events is Miami Herald coverage which has been very favorable to our School (Maker Faire, Miami’s Got Tech, Coderdojo Clubs, etc.). The SCIS website was redesigned in 2013 to reflect design updates to the main FIU website and to incorporate new trends in website interaction. Regarding messaging, we also established a project called “Content Management 360”. The goal of this project was to enhance the school’s messaging capabilities to reach our student community. We developed a custom content management system which allows us to post events, jobs, and news to our website, LCDs and social media accounts through one control dashboard.

The School has renovated ECS 241 our primary undergraduate lab. The new facility, called the “John C. Comfort Undergraduate Collabrium,” now provides the school with a signature seminar presentation space while housing 48 multi-core developer workstations used by our undergraduate population. This dual use environment is very consistent with workspaces in our industry offering movable and comfortable tables and chairs, WiFi and in-floor distributed A/C power. Such facilities are important to attract new students to our program, especially women who are under represented in our industry. The room is also equipped with lecture capture technology.

The School built an active learning classroom/group project instructional laboratory in ECS 235. The room provides wall mounted developer workstations and movable tables so facilitate group assignments during class meetings. Further the room is equipped with lecture capture technology so that lecture activities can be shared both in real-time and at the convenience of the student via the web or mobile device.
The School’s main conference room was renovated and stylized to be consistent with other FIU academic building appearance. The School’s logo is prominently displayed on the glass doors that lead into the room. The conference table, LCD signage, glass white boards and other furniture provides a very professional setting for visitors to be greeted.

The School’s jobs website, www.cis.fiu.edu/careerpath continues to provide new full-time, part-time, and internship opportunities for our CS/IT students and alumni. We have listed over 100 opportunities in the last year. Many employers list opportunities multiple times a year. We continue to work with Career Services to help our students become aware of opportunities, workshops and events available through their offices.

Outreach and Other Activities 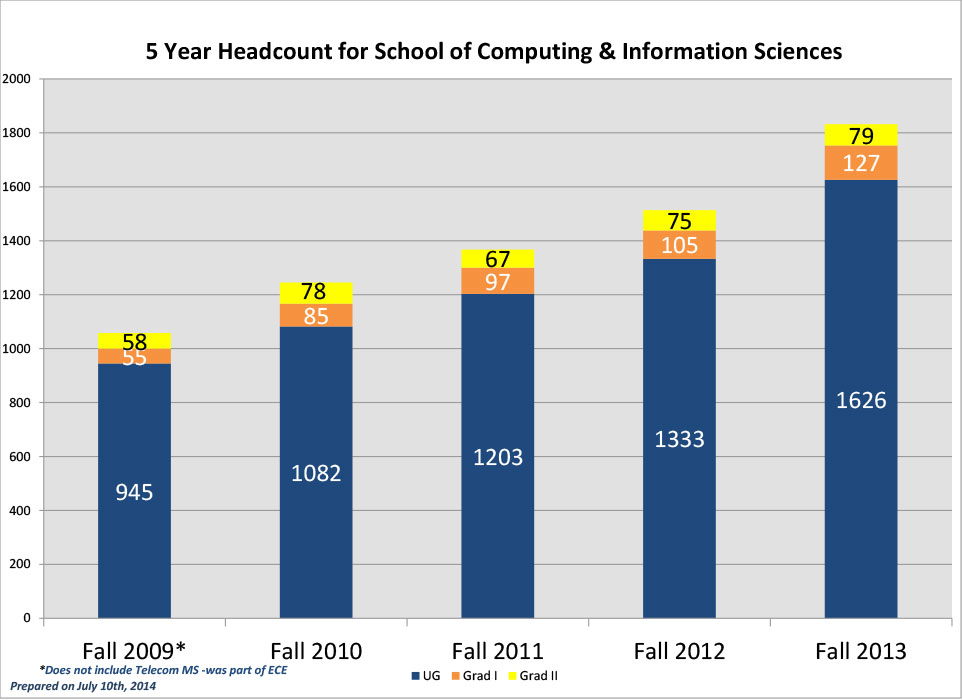 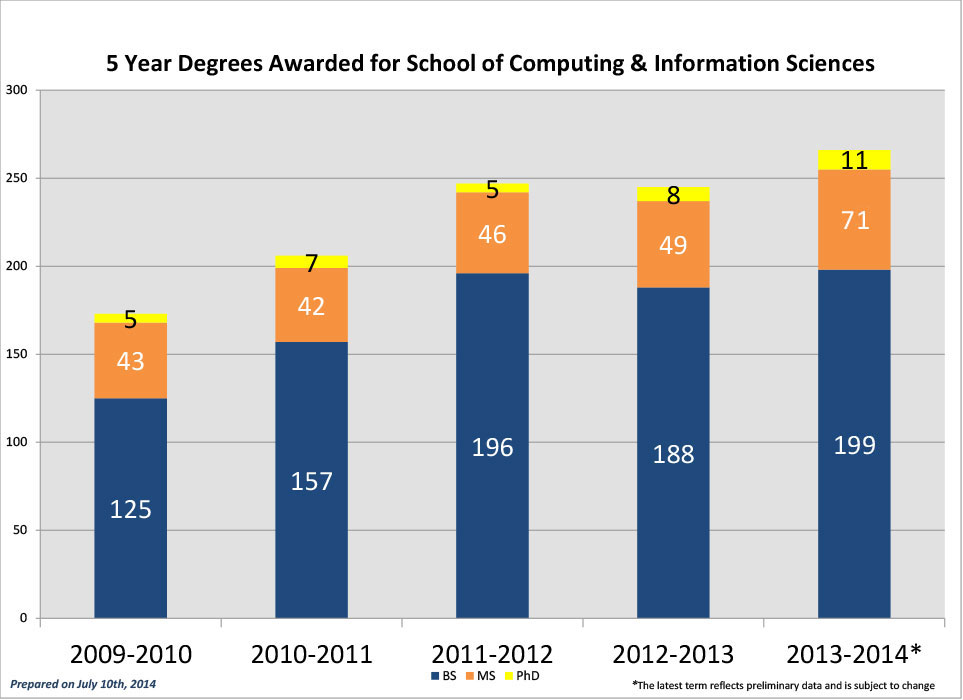 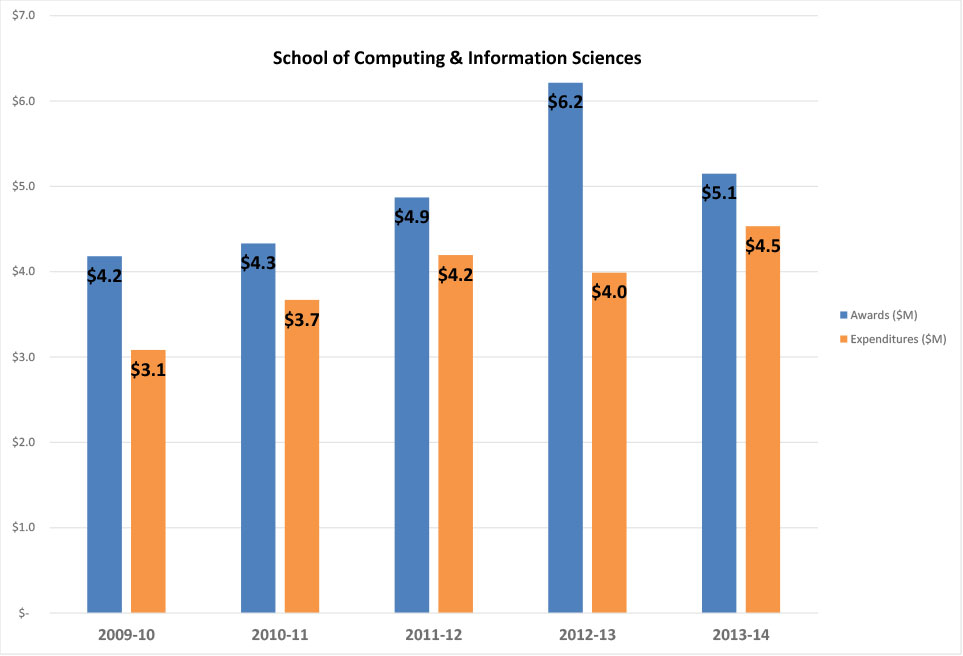