When a hurricane approaches land it pushes a wave of seawater, called storm surge, into low-lying areas like barrier islands and bays.  Miami-Dade County is particularly susceptible to this scenario. To help residents understand the dangers of storm surge, hydrological and software development experts at FIU’s International Hurricane Research Center (IHRC) and College of Engineering and Computing (CEC) have teamed up with Miami-Dade County to create a web-based application that allows a user to visualize the potential storm surge effects on their home or business.  The application is called the Storm Surge Simulator (see screenshot image below) and is available to the public at no charge at:

Dr. Shu-Ching Chen, Professor in the School of Computing and Information Sciences, who leads the development team of Computer Science students, says, “Our team feels very excited to apply cutting edge web technologies with storm surge modeling output in a way that can be useful for our community.”

Once a user enters (1) an address in the county or uses the digital map to pinpoint a location of interest and (2) the category of hurricane (using the familiar CAT 1, CAT 2, scale) the system provides the user a graphic of the potential sea water level superimposed on a human or building at the location of interest. This dramatic image makes it clear how human life and property can be at risk given a major hurricane impact. 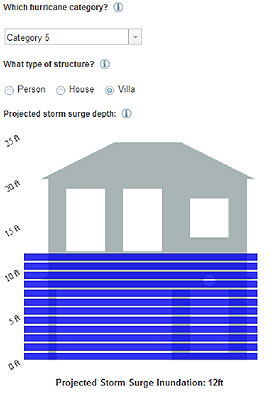 The storm surge levels displayed by the simulator are worst-case scenarios of hurricanes under “perfect” storm conditions. The National Oceanic and Atmospheric Administration and IHRC provided the storm surge inundation levels and topology information used by the simulator. The data sets are stored in an enhanced PostgreSQL database that provides an interface for querying geographic information stored in two-dimensional or three-dimensional space. Student software developers utilized an advanced JavaScript library to build the client-side processing of geospatial data, formatting the web page, and rendering a visual of the storm surge inundation levels. Google Maps is employed, providing the capabilities to translate a user’s address into coordinate points and displaying an overview of inundation levels across the various evacuation zones in South Florida.

“This has been a great learning opportunity for our student researchers – they really feel like they are making a difference,” said Dr. Chen. 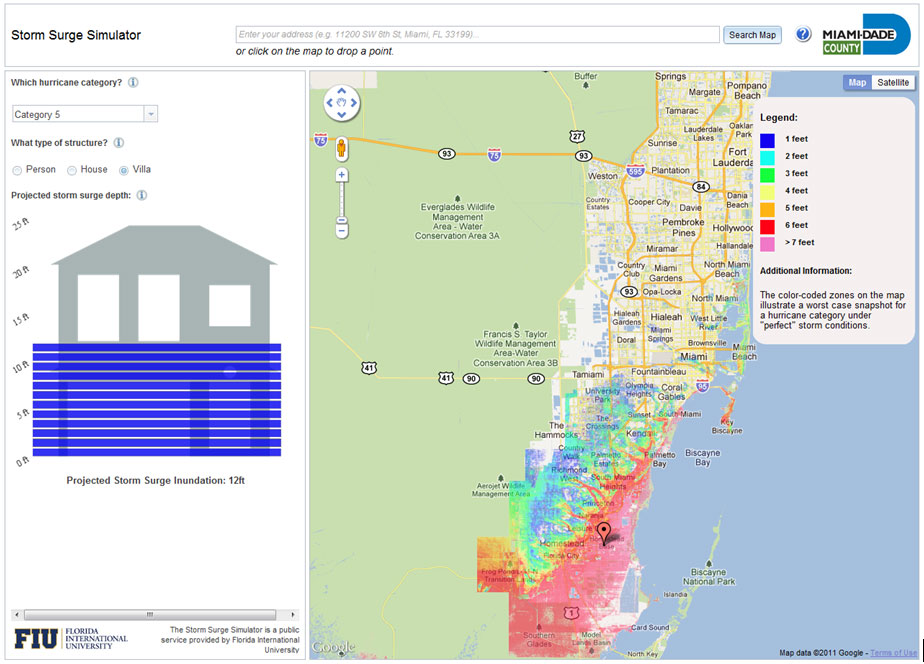 Can Storm Surge Flood Your Home?

The Map This! Blog