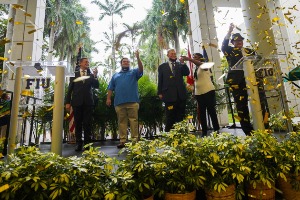 The FIU and South Florida communities on Monday celebrated the university’s rapid explosion on the national stage. In a year that more than any other has garnered wide recognition, unprecedented exposure and heightened prestige for the less-than-50-year-old urban research institution, FIU has seen its star rise to a level once unimagined — even as university leaders assert they’re just getting started.

In a you-ain’t-seen-nothing-yet address to a crowd of students, faculty, staff and other supporters, President Mark B. Rosenberg captured the ethos of a vibrant, vital university known for, as he says, turning the “impossible into the inevitable.”

“All that makes our university unique — our excellence, our grit, our vision, our agility — is being recognized for what it is,” Rosenberg told the assembled. “It’s a real formula for success. FIU is on the rise. Make no mistake about it.”

His words echoed a video, released just after midnight on Monday, in which he delivered news of an historic moment for the university: FIU had jumped 17 spots in the National University Rankings. In the gold standard recognition by U.S. News & World Report, FIU reached No. 78 on the list of public institutions.