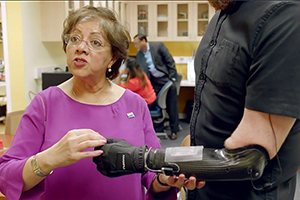 It is with great Panther Pride that we invite you to watch two recent television broadcasts featuring Ranu Jung, professor and chair of the Department of Biomedical Engineering and the Wallace H. Coulter Eminent Scholars Chair in Biomedical Engineering and her Adaptive Neural Systems Laboratory. A PBS segment that aired nationally is now also airing on Netflix worldwide.

You can view the segment by clicking on either link below:

The segment features Jung and the team responsible for developing the first wireless, implantable, neural-interface system for restoring sensations to amputees, which has approval as an investigational device from the FDA and is undergoing a first-in-human trial.

Ranu Jung holds the Wallace H Coulter Eminent Scholar endowed Chair in Biomedical Engineering at Florida International University where she is Professor and Head of the Department of Biomedical Engineering since 2011. She served as Interim Dean of the College of Engineering and Computing from 2015 to 2017. A Fellow of the National Academy of Inventors, Jung is at the cutting edge between engineering and neuroscience, developing devices that lead to scientific advances with clear pathways to clinical application.