A new pathway for tech partnerships with Poland

S.S. Iyengar, chair of the School of Computing & Information Sciences recently visited Poland as part of the Fulbright Specialist Program. The program, part of the U.S. Department of State, provides academics and professionals the opportunity to spend two to six weeks on project-based exchanges at host institutions worldwide.

Iyengar traveled to Poznań University of Technology (PUT) in Poland, his host organization, where he spent one week. His project, Towards Smart Cities: A Mobile and Social Networking Approach, was designed to enhance Poznań’s exposure to advanced technology in artificial intelligence, sensors, networks and the Internet of Things, all areas within Iyengar’s expertise. While there, he led workshops and presentations for more than 80 faculty members and 300 students and met separately with graduate students to conduct a mini workshop on Smart Cities. He also gave a workshop to more than 100 undergraduate students titled The Future of the Internet of Things. He conducted a separate workshop for faculty members in the university’s Electronic Telecommunication Networking and Computing Section including local professionals in the chapter of the Institute of Electrical and Electronics Engineers. 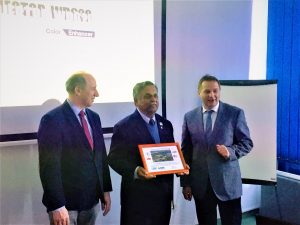 “It was a great experience to be able to provide my expertise to help these universities establish broader research contacts in the United States.” Iyengar said. “Although I think I learned more than they did,” he added, “Since this was my first time in Poland, it was great to experience a little of their culture,” said Iyengar.

As part of the Fulbright Specialist Program, Iyengar also visited universities in Kraków. There, he discussed a potential partnership with AGH University of Science and Technology. This university, formerly known as the University of Mining and Metallurgy is considered one of Poland’s prestigious technical universities. Administrators met with Iyengar about the prospect of research collaboration with FIU due in large part to the university’s Carnegie research rating. FIU has been recognized as an institution with “highest research activity” or an R1 category since 2015. This classification represents the highest level of research activity for doctorate-granting universities in the U.S. Less than three percent of universities, from a total of 4,665, were classified a R1 in the latest ranking.

“Overall, the visit was very productive,” said Iyengar, “FIU and the Polish universities I visited are on the cusp of making tremendous new strides in technology in the next few years. I think our partnerships will be of tremendous value to Poland, the United States and of course, the state of Florida and FIU,” added Iyengar.  “I’m very excited about these new prospects for research collaboration.”

For his work, Iyengar received an award from PUT.

Iyengar said that the Fulbright Specialist Program is one of the few initiatives where academics and professional have the opportunity to make a significant impact, not just on a university, but also on the global future as a whole. “It is magnificent; I would highly encourage all of our faculty members to look into this exciting program,” he said.