More than 25 years of excellence as an educator, researcher and leader at FIU have earned Irtishad Ahmad the 2016 W.A. Klinger Educator Award from the American Institute of Constructors.

The AIC, which promotes industry professionalism and ethics, has presented the annual award since 1976 to honor educators who distinguish themselves while advancing the construction profession, their school and the industry. 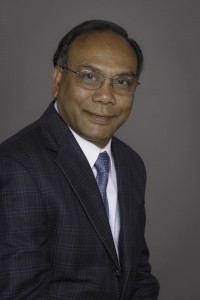 Ahmad, who arrived at FIU in 1990, is the founding director of the OHL School of Construction. He has overseen a growing construction management program that has developed important partnerships with industry, updated its curriculum to turn out career-ready graduates and established an annual conference. Under his direction, the school has hired faculty engaged in leading-edge research and who employ state-of-the-art technology in their teaching. That combination has drawn an increasing number of students to the school’s campus in South Florida—a region that offers a dynamic “real-world lab” for young people interested in construction careers—even as its online courses and programs have attracted interest from around the world. Key to the success of both classroom-based and online programs rests in Ahmad’s active involvement with the school’s Industry Advisory Council, a group of professionals representing top companies that offers advice on curriculum and provides hands-on learning opportunities through site visits and internships.

Dr. Ahmad is a registered professional engineer in the State of Florida whose teaching and research are focused on information and communication technology, decision and risk analysis and concrete technology. He has developed the backbone of graduate courses in construction management and civil engineering at FIU.

Prior to joining FIU, he held positions at North Dakota State University and the University of Cincinnati. Ahmad earned his Ph. D. in civil engineering from the University of Cincinnati and his master’s and bachelor’s degrees in civil engineering from Bangladesh University of Engineering and Technology. He is a frequent speaker at national and international conferences on topics ranging from information technology in construction to effects of wind loading on structures. He completed several funded research projects in construction and civil engineering about which he published extensively. His research is funded by National Science Foundation, The U.S. Department of Transportation and several state agencies. Ahmad co-authored the book Quantitative Techniques for Decision Making in Construction and is a past editor-in-chief and current executive member of the editorial board of the Journal of Management in Engineering, published by the American Society of Civil Engineers. He is an elected fellow of the American Society of Civil Engineers.