When FIU computer science student and School of Computer and Information Sciences (SCIS) webmaster Joshua Martinez asked a group of 40 high school girls if they were familiar with Application Programming Interfaces, virtually all of the hands in the room immediately shot up to answer yes.

It was the kind of response organizers of the Girls Who Code Summer Immersion Program – an intensive 7-week opportunity that pairs project-based computer science education with real-world tech industry exposure – are happy to see.

The young women who visited SCIS on July 22 were enrolled in the program, offered for the first time in Miami this summer and now taking place in 20 cities around the country.

During the program, the girls learn Scratch, a visual programming language that introduces them to basic computing constructs. From there, they move on to programming robots in the popular programming language Python, as well as Java script, data structures and algorithms, web development, mobile applications and entrepreneurship.

A national non-profit organization that aims to inspire, educate and equip young women for futures in the computing-related fields, Girls Who Code is working to close the gender gap in technology.

Female mentors including Code For Miami’s Rebekah Monson have visited the girls during the program. The girls also take field trips, visiting start-ups and schools such as FIU where they see how professionals apply computer science.

Maria Mejia, a rising junior at iPrep Academy in downtown Miami, said the program has changed her view of the computer from being a piece of personal technology to a powerful device that she can use to create things. This fall she’ll be enrolling in AP computer science at her high school and is considering it as a major when she goes to college. Computer science is the future, she said, and no matter what she majors in she will need it. 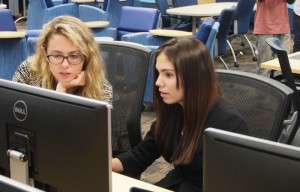 While at FIU, the girls toured campus and visited research labs, including the Discovery Lab, where they saw FIU’s TeleBot and other robots in action, as well as the High Performance Database Research Center, where they learned about the center’s flagship project, TerraFly. During the workshop, the girls learned how to utilize the Terrafly API to build their own web-based geolocation mapping app using JavaScript.

Ria Galanos, an instructor with Girls Who Code who teaches high school computer science at Thomas Jefferson High School for Science and Technology in Alexandria, Virgina, said seeing FIU’s research labs and interacting with the students who work in them gave the girls an opportunity to see what they’re learning in class being applied in the real world.

Galanos said the program is about giving girls the basic vocabulary and concepts of computer science and empowering them to keep going from there.

“These girls will look at computing differently and they will adjust their future plans accordingly,” said Galanos, now entering her 14th year of teaching computer science.

“Certainly not all of them will go into computer science, but when they go into another field they may have more of an appreciation for the computing part of it and then take those classes to supplement their other passions. So they will be affected, for sure. It’s absolutely making a difference.”

Sophia Christodoulou, a junior at Archimedean Upper Conservatory in Miami, said the program has had a big impact on her. While computer science is not offered at her high school, she expects to continue learning more about it online and pursuing it further in college.

“It’s been so awesome,” she said. “I’ve learned so much more than I ever thought I would. It’s been incredible.”

Emily Reid, an instructor with Girls Who Code who is pursuing her master’s degree at Columbia University in New York, recalled feeling intimidated when she first took a computer science class in college. She found herself in a classroom full of young men who had been hacking their computers for years and knew all the computer jargon, which left her feeling like this was something she couldn’t do. It’s a common experience for young women that Girls Who Code is trying to change.

“This program really gives them a safe space to be introduced to the subject in a fun and exciting way,” she said. “I think what Girls Who Code is doing is creating this really awesome environment for these girls to be introduced to computer science, and then giving them the confidence moving forward. They’re smart, motivated girls, and they’re sharing what they’re learning with their little sisters and their best friends, so it has this butterfly effect.”

While men continue to greatly outnumber women in computer science, Mejia said the gender gap doesn’t really intimidate her. “This program has taught me the confidence to know what I’m good at and given me an understanding of computer science,” she said. “I know that even if I might be the minority in a class someday that doesn’t affect my future or how good I am at something, and that I can’t ever underestimate myself because I’m a girl.”