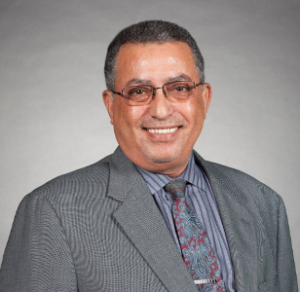 Dr. Osama A. Mohammed serves as a Distinguished University Professor, Associate Dean of Research, and at the College of Engineering and Computing, Interim Director for the School of Electrical, Computer, and Enterprise Engineering Florida International University (FIU), Miami, FL, USA. He is also the Director of the Energy Systems Research Laboratory, FIU, and a Professor of Electrical and Computer Engineering. Dr. Mohammed is world-renowned for his expertise in various research topics in power and energy systems. Specifically, he has interests in computational electromagnetics, design optimization, and physics-based modeling in electric drive systems and other low-frequency environments. His interests also include; electromagnetic signatures, wide-bandgap devices and switching modeling and techniques, ship power systems modeling and analysis, energy storage systems, and power electronics. His recent research projects include; smart-grid distributed control, interoperability, and energy cyber-physical systems. He currently has active research projects with several federal agencies in these areas. He has authored nearly 800 articles in refereed journals and other refereed international conference records. He has also authored a book and several book chapters and holds 15 patents awarded, and several others are pending. He has made numerous keynotes and invited presentations at academic and industrial organizations and conferences worldwide in addition to being a general chair of 10 major IEEE international conferences.

Professor Mohammed is a Fellow of IEEE and a Fellow of the Applied Computational Electromagnetic Society ACES. He is a recipient of the prestigious IEEE Power and Energy Society Cyril Veinott Electromechanical Energy Conversion Award and the Outstanding Research Award from FIU in 2012, and the 2017 Outstanding Doctoral Mentor at FIU.