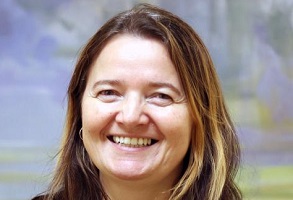 Daniela Radu, associate professor in the College of Engineering Department of Mechanical and Materials Engineering and a Diversity Mentor Professor, received a $450,000, three-year grant from the Office of Naval Research, which coordinates science and technology programs of the United States Navy and Marine Corps.

Information processing, cyber security, and spectrum superiority are some of the most important contemporary topics in Naval research. The grant will address new methods of processing large amounts of data at ultra-high speeds, which Radu believes can be done by integrating optics (the science of studying the behavior and properties of light) and photonics (physical science of light generation, detection, and manipulation) into high-performance storage data components.

Currently, the circuitry in phones and other devices are made up of metallic, conductive or semi-conductive components, which are difficult to miniaturize further than they are now. Instead, Radu will explore the possibility of communicating with lasers at nanoscale (a billionth of a meter wide). These tiny lasers can still emit enough light to trip switches in a circuit. “The success of this project will advance Naval communication capabilities by enabling ultrafast communication with ultra-low power, low weight, and small size components, which can be used in sea, land, or airborne environments.” The project has the potential to impact the area of ultrafast photodetectors, sensors of light or other electromagnetic radiation.

The first step is to fabricate materials. “The current methods use nano-machines, which means scaling down. There’s a limit to how far down things can be scaled, and they’re very expensive,” says Radu. She’ll use a different approach, by trying to turn nanomaterials into inks and printing them at nanoscale with ultrafine printers. “We’ll be making very small particles and adhering them together. All the equipment necessary is currently available at FIU, and we have very solid preliminary data to say that these can work.”

Radu is also the director and principal investigator of the Center of Research and Education for 2D Optoelectronics (CRE2DO), which is leading innovative education and research in support of NASA’s efforts to develop revolutionary technologies that promote the advancement of space exploration.”