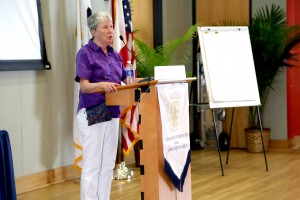 High school computer science classes are not just for geeky boys. They’re for everybody.

That’s the message from high school teachers who gathered for a three-day Tapestry Workshop at Florida International University last week to share strategies and ideas to attract more and diverse students, particularly girls, to their computer science classes.

While career opportunities are on the rise in computing and information technology, representation of women in these areas, which was already small, is actually on the decline, said Debra Davis, a faculty associate in the National Science Foundation Industry-University Cooperative Research Center for Advanced Knowledge Enablement in FIU’s School of Computing and Information Sciences (SCIS).

That’s a detriment not only to women, but also to society and computing in general, said Davis, whose background is in computer science and cognitive psychology.

“To really get more women in technology we need to start at a younger age with girls and let them learn what it is really about and also make it clear to them that yes, this is something they can do,” Davis said.

“If you look at a lot of stereotypes in computer science, you think of this nerdy little male, who’s skinny and has no social skills. But that’s just not the reality,” she continued. “We want girls to know that we are just like them. The reality is that we really need people from different backgrounds, different genders, different cultures, to really bring a very rich body of knowledge and experience to help us create better computing products.”

The image girls have of fields such as computer science, physics and engineering represents the biggest obstacle in recruiting them into these areas, said Maria Klawe, president of Harvey Mudd College, former dean of engineering at Princeton University, and the workshop’s keynote speaker.

The image is that “this is boring, it’s anti-social, it’s the kind of thing no person in their right mind would find interesting,” said Klawe, who is nationally known for her successful efforts to improve enrollments of women in engineering and computer science. “And when you can actually get them to get engaged in it and find out how much fun it is and how much you can do with it, then you get traction.”

Lisa Milenkovic, a STEM (Science, Technology, Engineering and Mathematics) supervisor for Broward County Public Schools who attended and presented at the workshop, has heard stories of parents and guidance counselors who tend to think of computer science as a field for boys and steer girls to other career paths. A former chemist, she said most schools don’t really have room in their core schedule to fit math, science and computer science as a separate course.

“So my idea and what I’m trying to work on is getting all our math and science teachers, especially elementary and middle school, familiar enough that they can start [incorporating] some of these computing tools, programming, computational thinking, and algorithmic thinking into their [lessons] as another opportunity,” she said. “Why do a PowerPoint when they can do a game?”

Hui Lu, who teaches math and computer science at New Dorp High School in Staten Island, NY, said she learned strategies at the workshop to learn how to recruit more girls into her classes, an area where she focuses a lot of effort.

“Last year I just had three girls in my computer science classes, but this coming year I will probably have more than 10,” she said. “I think it’s important for them. The computer is not just for programming. That’s why I tell them, just try it and you can use it anywhere in the future.”

Jim Cohoon, an associate professor of computer science at the University of Virginia, and his wife, Joanne Cohoon, an associate professor in the Department of Science, Technology and Society at the University of Virginia, started the Tapestry Workshops, which have been held at about 20 different colleges and universities around the country in the last two years.

The workshops are funded in part by a grant from the National Science Foundation. One of the reasons FIU was chosen for last week’s workshop, the first to be held in Florida, was the university’s existing outreach efforts with local schools, including workshops with STEM teachers and talented high school students in Miami-Dade and Broward counties.

Joanne Cohoon says the workshop focuses on ways to make computer science more interesting to high school students, the career opportunities in this field, how to avoid stereotype threats, and developing recruiting messages. She said 85 percent of the all the high school teachers who participate in the workshops report back a year or more later that they have both recruited more students and recruited more female students into computing.

“Computing has been focused sort of on a narrow part of our high school population,” she said. “What we want to do is broaden the appeal so that many, many more students come into computing and feel at home and have the opportunities that computing offers.”

Giri Narasimhan, professor and associate dean of research and graduate studies at FIU’s College of Engineering & Computing and one of the workshop’s organizers, said FIU’s outreach efforts with local teachers and students, along with the school’s location and the demographics of South Florida make this an appealing place to hold such an event, which drew teachers from the local area as well as the rest of Florida and other parts of the country.

Last year, FIU teamed up with Miami-Dade Public Schools to offer a one-week training workshop for STEM teachers, and earlier this year Narasimhan and Kip Irvine, a senior instructor in the SCIS, held a series of three advanced programming and problem-solving workshops for talented high schools students from Miami-Dade and Broward counties. In June, Narasimhan, Irvine, Davis, Milenkovic and Cristy Charters, a computer science teacher with Miami-Dade Public Schools, organized a two-week workshop for STEM teachers from Miami-Dade and Broward counties, to teach computational thinking, algorithms, and programming.

“The fact that the School of Computing and Information Sciences has put in a lot of effort along these lines is very critical,” Narasimhan said. “Our efforts with the programming team, with training high school teachers, with training and mentoring high school students, all of these have come together to make this an excellent opportunity for Tapestry to have a huge impact.”