In its second year of existence as the first named school in the College, the OHL School of Construction made great strides in a number of noteworthy areas.

The American Council for Construction Education (ACCE) re-accredited the undergraduate BSCM program after a site visit conducted in October 12-15, 2013. The school received favorable feedback from the visiting team and its strengths, leadership, engagement with the industry and the support from the college, were duly noted. The school curricula not only met the rigorous standards of ACCE, but in many instances exceeded them.

Industry partners were involved in several events organized and sponsored by the school. In addition to regular meetings of the Industry Advisory Council, FIU 101 (presented by the FIU Facilities Management Department), the McGraw-Hill Construction Outlook (presented by Cliff Brewis), and a Career Expo were held.

The school enjoys endowment and operating support from OHL Construction Company, and support for establishment and maintenance of the Built Environment Informatics Laboratory (BEIL) from Moss and Associates. The school also received cash donations and career fair fees in the amount of $38,000 from its Industry Advisory Council (IAC) members. The school has launched a new campaign for naming various facilities and laboratories.

The school continued its international internship program with OHL by selecting and sending a student intern to Madrid this year.

Our undergraduate student team won second place overall in the Associated Builders and Contractors (ABC) student chapter Construction Management Competition held in Las Vegas, Nevada. The FIU team was competing with student teams from the best construction management programs in the nation such as Auburn University, Clemson University, Colorado State, Georgia Tech, Purdue University, Texas A& M University, Ohio State University, and University of Florida among others. This year in spring the team won the second place overall held in Birmingham, Alabama and last year, it won the championship award in the same competition held in San Antonio, Texas.

The total number of students graduated this year is 113, increased slightly from 102 last year.

The school did extremely well again this year in external research funding, thanks to Dr. Mostafavi, Dr. Bayraktar and Dr. Orabi.

The planned construction process laboratory was completed in summer 2013 and is now being used by students and faculty. The laboratory is intended to provide students with hands-on demonstrations of real-life construction processes, construction materials, components and their assembly. Half-built walls, steel structural joints and samples of various construction components will be the features of this laboratory.
It also houses, the MEP (mechanical, electrical, plumbing) studio on the first floor of the Engineering Center building. This laboratory is equipped with HVAC, electrical and plumbing appliances/fixtures for demonstration to students, and computer hardware and software for instruction and training.

Dr. Yimin Zhu left FIU to join Louisiana State University as a professor and Dr. Youngcheol Kang left FIU to go back to his native country Korea. The school is fortunate to have Dr. Ali Mostafavi, a recent Ph.D. graduate of Purdue University join us in fall 2013. In fall 2014 Dr. Nipesh Pradhananga, a Ph.D. graduate of Georgia Tech will join the school as a tenure track assistant professor.

The annual full-time equivalent (AFTE) students, calculated as the fundable student credit hours divided by 40 or 32 credits for the undergraduate and graduate students, respectively. As noted above regarding headcount, the AFTE figures show improvement in the graduate level (masters, GRAD I), while a significant decline in the undergraduate (upper division) AFTE is noted.

The school offers classes in the FIU I-75 campus (to be relocated to a new Miramar campus), which is located in Broward County for convenience of the students primarily residing in the Broward and Palm Beach counties. The school offers a number of classes there every semester during the academic year, and fewer during the summer. Courses offered at the FIU I-75 during a given semester are not offered at the Engineering Center during that same semester and vice versa. During 2013-14 academic year 9 undergraduate and 2 graduate course-sections were offered with a total of 119 undergraduate and 14 graduate student-registrations. There has been a drop in both undergraduate and graduate enrollments.

Four student chapters are active in the School. These are: ABC (Associated Builders and Contractors), AGC (Associated General Contractors), National Association of Women in Construction (NAWIC), and Sigma Lambda Chi Honor Society. ABC Student Chapter is the most active and works closely with the south Florida ABC. This student chapter participates in the National Construction Management Competition annually. Every year ABC East Florida Chapter organizes a golf tournament to raise funds for supporting the student team. Dr. Jose Faria serves as the advisor and Dr. Ayman Morad as the mentor of the team, participate in the national competition.

OHL has signed an agreement with FIU for the university’s first international internship program, to be based at the company’s headquarters in Madrid. For 10 weeks in summer 2013 OHL employed two FIU students. This year one student was selected for the program.

The first cohort of the UNIBE students (Dominican Republic) graduated last summer. Another cohort will begin soon. The Professional MSCM program at the Pines Center also graduated its first cohort last fall. The second cohort will graduate this year in December.

The school did extremely well again this year in external research funding, thanks to Dr. Yimin Zhu, Dr. Bayraktar and Dr. Kang. Dr. Mostafavi received a grant from the Construction Industry Institute at the beginning of this fiscal year (2014-15). Dr. Mostafavi and Dr. Orabi also received a UTC (University Transportation Center) grant in collaboration with the Civil and Environmental Engineering Department.

The School will strive towards establishing the construction program as a research intensive program. Hiring of new faculty in strategic areas to increase external research funding will continue to be a priority. Efforts will be made to hire faculty with proven strengths in research and to identify emerging research areas and funding agencies. Although, two faculty members left the school this year, one new faculty member is joining this fall. 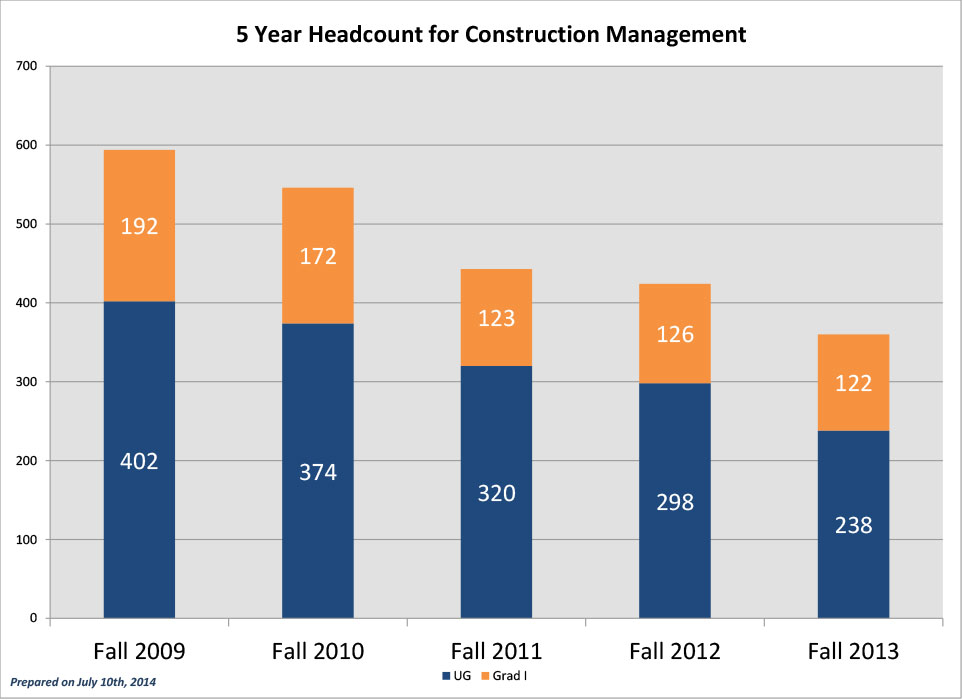 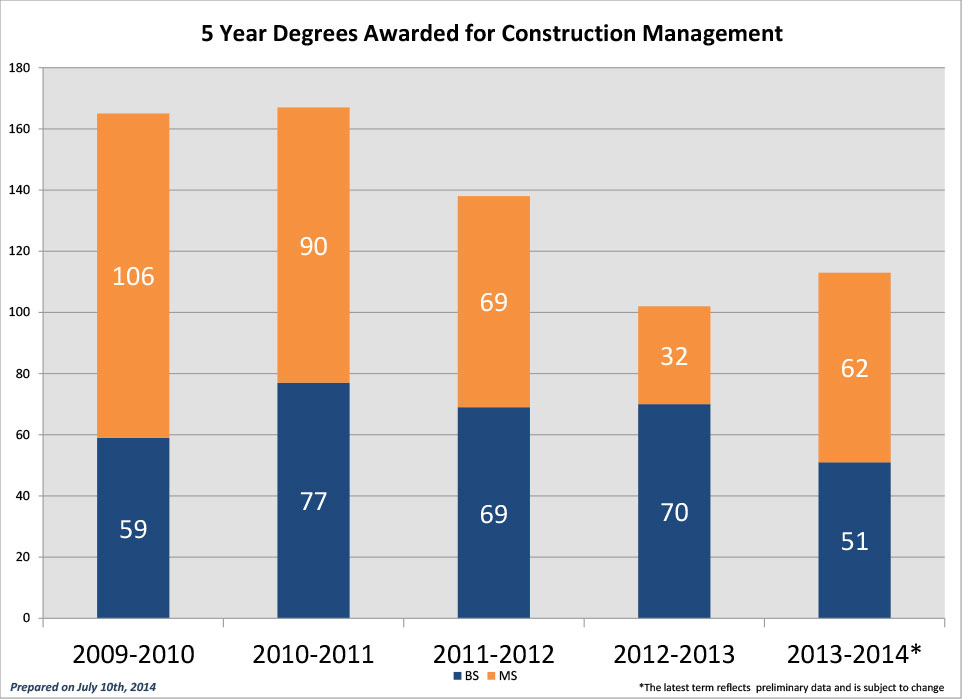 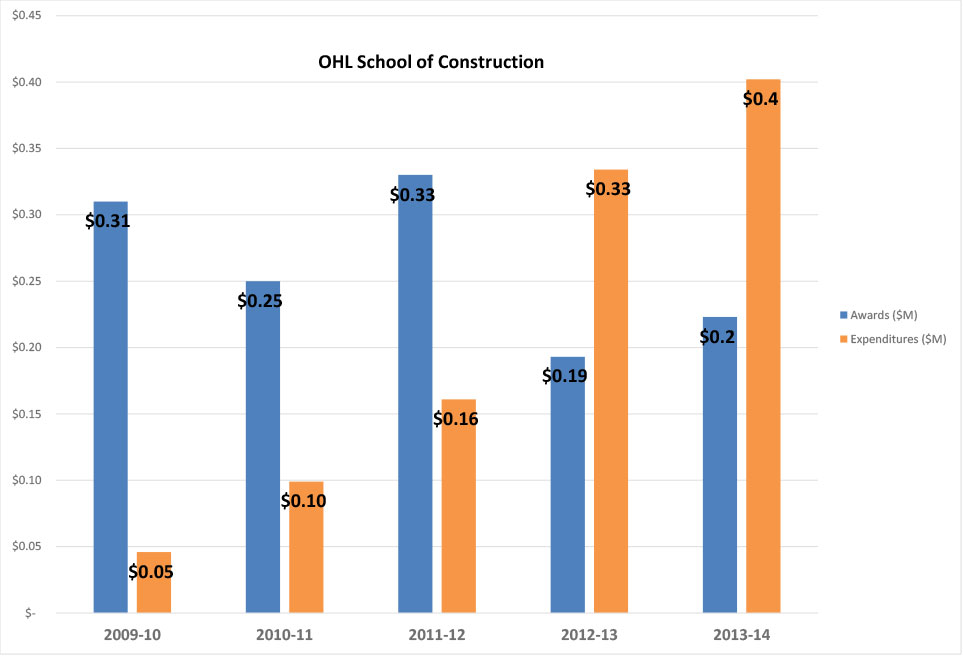