In 2013-2014, the Department of Electrical and Computer Engineering (ECE) continued its growth and accomplishments. The faculty continues to be involved in a balanced combination of research and teaching so as to fully benefit the students. A large number of our faculty has considerable industrial experience and some maintain active consulting roles to provide current and relevant knowledge to the students in classroom and research settings. The ECE Department continues to improve the quality of the undergraduate program by reviewing and updating the curriculums for both the electrical engineering and computer engineering programs to attract more high school graduates and transfer students. Our vision remains the same to have the best undergraduate program in the State of Florida and to be internationally recognized with our graduate program driven by excellent research that responds to the needs of the State of Florida, in particular, and the nation in general. Furthermore, serving our community and maintaining our mission in providing excellence in undergraduate education so that our graduates become critical thinkers, creative problem solvers and lifelong learners. The departments’ student enrollment continued to increase both in the undergraduate and graduate programs. With its focus on research the department awarded more M.S. and Ph.D. degrees.

The Department’s research efforts continue to be funded through major governmental, institutional and corporate sponsors such as the National Science Foundation, the U.S. Department of Defense, the Office of Naval Research, the U.S. Air Force, the National Security Agency, the Department of Education, the Army Research Lab, Miami Dade County Public Schools, Florida State University, among others.

New hires of 2014 include Dr. A. Selcuk Uluagac, assistant professor, and Dr. Kemal Akkaya, associate professor. Dr. Uluagac brings a vast knowledge of network security and years of teaching experience as well. Dr. Akkaya has developed significant programs in wireless networks and security, and has also recently been funded by the National Science Foundation for 300K over the next three years.

FIU researchers are using technology and principles derived from the traditional Japanese art of origami to create remarkably compact and incredibly efficient antennas and electronics. Dr. Stavros Georgakopoulos is working with colleagues at Georgia Tech with the support of a $2 million grant from the National Science Foundation. The team will work on the development of unique shapes that can allow antennas to be only a couple of centimeters when folded flat and expand into much larger spaces with powerful, ultra-broadband capabilities.

In a study published in the Scientific Reports, researchers from the Florida International University Herbert Wertheim College of Medicine and the FIU College of Engineering and Computing described what could be a breakthrough in the treatment of ovarian cancer: a novel way to deliver cancer-killing drugs using nanotechnology. In their lab experiments, Taxol, a chemotherapy drug used to treat ovarian cancer, was loaded onto a magneto-electric nanoparticle, and using an electric field the drug penetrated into the tumor cells completely destroying the tumor within 24 hours, while sparing normal ovarian cells. ECE’s very own Dr. Sakhrat Krizroev is directly involved with this research.

Along in fighting cancer, Dr. Khizroev has also potentially found a cure for multiple brain diseases. His approach uses magnetic energy to manipulate the electrical charges of particles once they are inside the brain. This gives researchers the ability to directly apply medicine to regions of the brain which were never reachable before. More specifically, Dr. Khizroev along with Dr. Madhavan Nair, have described a revolutionary technique they have developed that can deliver and fully release the anti-HIV drug AZTTP into the brain.

This fall will signify the first semester of our new fully online M.S. in Network Security. The program has been spearheaded by Dr. Alexander-Perez Pons, a professor and specialist in cyber security. Over the course of one year, students enrolled in this program will acquire the proper skills needed for a career involving network security. The program structure consists of two semesters, with four eight week course in each semester.
The ECE faculty continues to be invited to lecture, provide plenary presentations in the U.S. and international conferences and serve as editors in major journals either as a guest, associate or on the editorial board.

The ECE Department encourages undergraduate and graduate students to participate in internship training. Consequently the students have been offered internships by various companies locally in the United States and the world. The department also encourages students to present papers, attend conferences and collaborate in research activities with other Universities.

Job opportunities for students continue to be offered to our graduates by government agencies and the industry.

Alumni in the News

A team of researchers from the University of California, Riverside and Russian Academy of Science have demonstrated a new type of holographic memory device that could provide unprecedented data storage capacity and data processing capabilities in electronic devices. There are three main researchers working on this, one of them is Fredrick Gertz, a graduate student and ECE alumni who studied in Dr. Khizroev’s lab. (Source: http://ucrtoday.ucr.edu/20613)

Jin Wang and Xiaozhen You, both doctoral graduates from FIU ECE, are collaborating on an article with Drs. Mercedes Cabrerizo and Malek Adjouadi on a study of the language network segregation in pediatric localization related epilepsy.

Craig Chin, an FIU ECE alumni from Dr. Armando Barreto’s Digital Signal Processing Lab, was elected to serve on the Graduate Programs Committee at Southern Polytechnic State University where he is currently an assistant professor in the ECE department.

Kenneth Faller, assistant professor of computer engineering at Cal State Fullerton, worked with the National Center for Border Security and Immigration at the University of Arizona. He worked on an AVATAR system that embodied a conversational agent embedded in a kiosk that uses a variety of non-invasive sensors to evaluate credibility during an interview. The AVATAR is designed to enable non-invasive, automated, rapid screening of people at the border crossings, airports, and other settings. He received his Ph.D. from FIU in 2009 and was a graduate assistant in Dr. Barreto’s DSP Lab.

Fundraising
The department continues with our fundraising efforts with many notable gifts such as the Operation Technology’s major software grant to the Smart Grid Testbed and the INSYST generous annual donation valued at $31,000 per year. The department is furthering it networking connections to bring awareness and interest for the activities within the department. Furthermore, we have continued finding support from the industry in the form of sponsorships of Senior Design projects, funding the completed projects.

Fast Facts
In this academic year, the ECE Department had 20 full-time tenured or tenured track faculty members. We are planning to expand by bringing in more faculty members in the following year.
The Ph.D. enrollment in fall 2013 increased by 17% compared to the previous year. There was also a 17% increase in the undergraduate enrollment. Thus overall enrollment in the undergraduate and graduate programs increase drastically compared to previous years.

Research Thrusts
The department continues to enhance the research in the areas of energy, nano-technology and nano-medicine.

Future Plans and Priorities
Future plans for the department include forming a Marketing Committee to assist with bringing exposure to the department. We are expanding in faculty and students as well have plans for revamping the new Cyber Security lab with the new M.S. program launch in the fall 2014 semester. 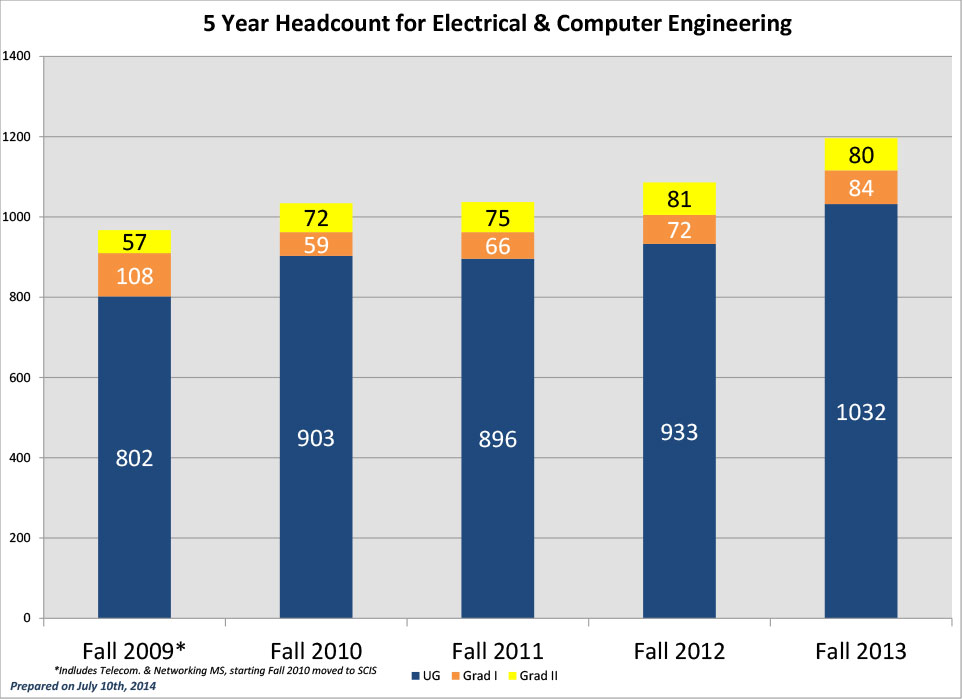 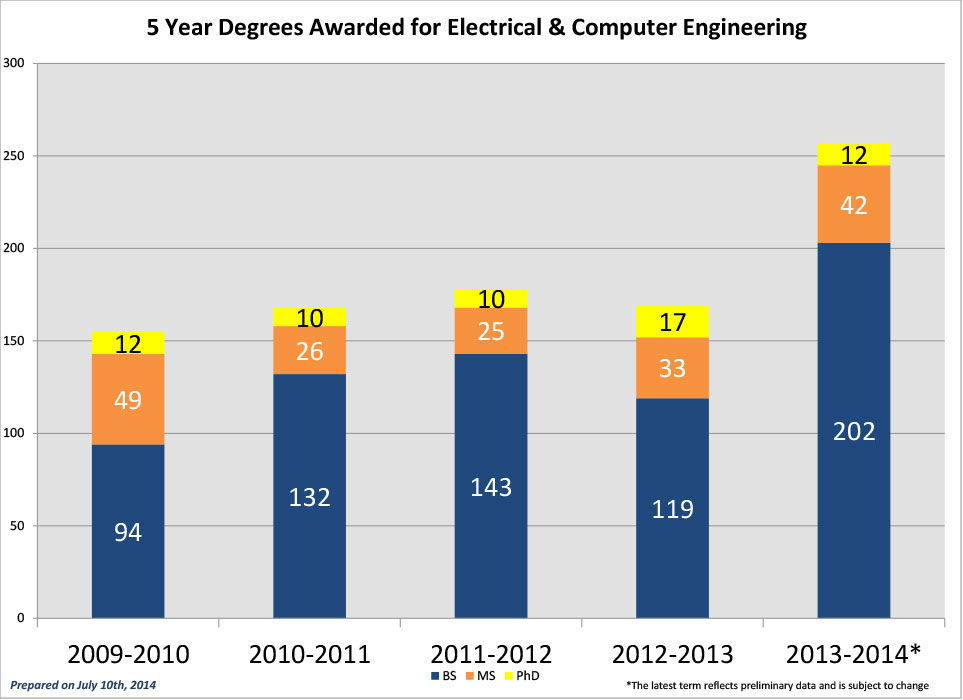 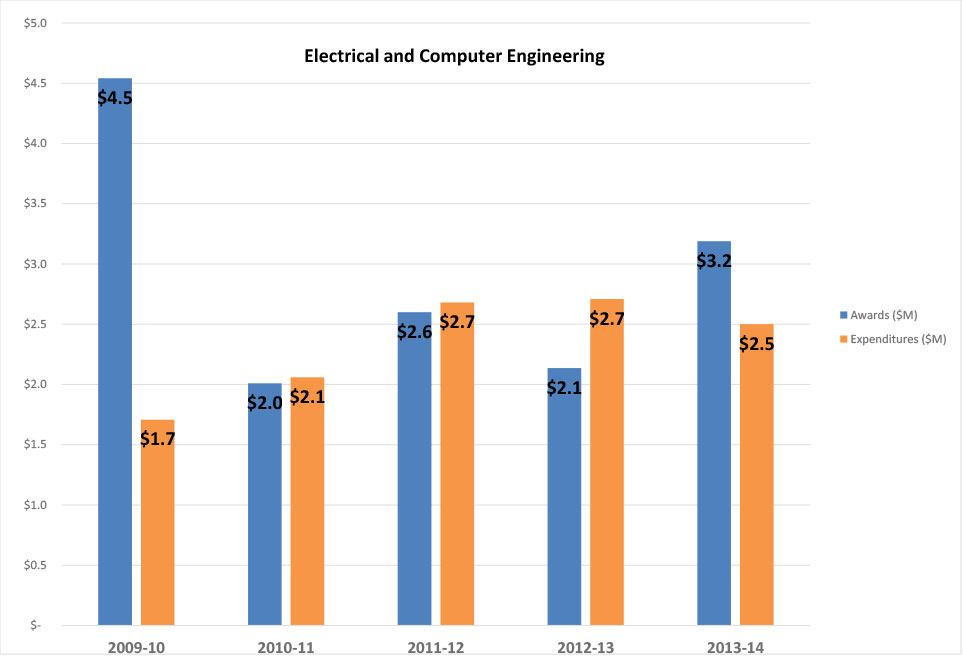