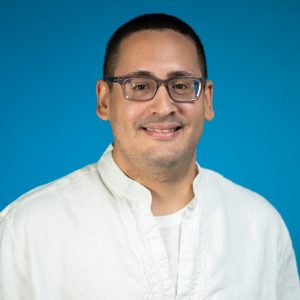 While caring for his mother, who was recovering from surgery, Mario Lopez discovered that he loved solving math problems. That passion for mathematics led him to academic excellence, and today, he’s graduating with a master of science in data science.

Mario grew up a first-generation Cuban American in a family of modest means. During his senior year of high school, Mario’s mother was taken to the hospital in the middle of the night after suffering a brain hemorrhage. He worked long shifts at Home Depot as a sales associate to support his mother. When she returned home after several months, Mario and his mom shared a room so he could help her.

He sat next to his mom doing homework when Mario, a former FIU biomedical engineering major, charted a new path. He realized he loved doing math problems, he changed majors and earned graduated with a bachelor of science in mathematics. He then enrolled in the Knight School of Computing and Information Sciences and became a graduate student in data science.

His work stood out. He took first place in a contest in his machine learning course. For his capstone project, he designed a test that could tell authentic signatures from forged ones with 90 percent accuracy.

Mario now hopes to be employed in the data science industry for a government agency. While he still puts in many hours helping his family, he considers himself a little happier every day, with a budding career, a renewed commitment to fitness and a girlfriend who he says makes him happy.