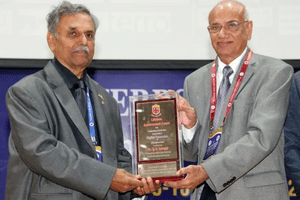 Ram Iyengar, Ph.D. received the Lifetime Achievement Award at the 7th Interpol Digital Forensics Expert Group Meeting at National Forensics Science University, Gandhinagar, Gujarat, India. Dr. Iyengar, Distinguished University Professor, is the founding director of the Discovery Lab and director of the U.S. Army-funded Center of Excellence in Digital Forensics at FIU. He received the award for his contributions in the field of digital forensics.

Ram has received national and international acclaim for his work in high-performance intelligence systems, data science and machine learning algorithms, sensor fusion, data mining and intelligent systems. His groundbreaking research has led to practical applications in industry and government, including Raytheon, Telcordia, Motorola, the U.S. Navy, DARPA and universities and other agencies across the globe.

In 2021, in collaboration with Historically Black Colleges and Universities and Minority Serving Institutions, a $2.25 million grant was awarded by the U.S. Army Research Office to establish a Digital Forensics Center of Excellence. Over his 30-year career, Ram has garnered more than $65 million in funding for research and education. In 2014 and 2016, his work was featured on the cover of the National Science Foundation’s Compendium on breakthrough technologies. In 2019, he received the IEEE Test of Time Award, and in 2012 he was selected as a Fellow of the National Academy of Inventors.

Ram has received multiple patents and has directed and mentored more than 65 Ph.D. students, as well as master’s and undergraduate students. He has been published extensively in professional and scientific journals and has authored, co-authored and edited 26 books.

We thank Ram for his leadership, inspirational teaching and innovative research. His work at FIU continues to shine a spotlight on the university and offer our students an unparalleled opportunity to further their knowledge and prepare them for outstanding careers.