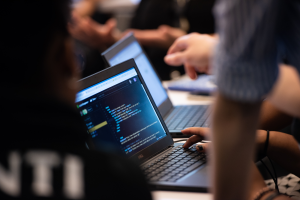 Florida International University’s (FIU) College of Engineering and Computing Knight Foundation School of Computing and Information Science (KFSCIS) has partnered with Break Through Tech to develop programs that will propel women and underrepresented communities into technology degrees, careers and leadership positions. Part of the Gender Equality in Tech (GET) Cities Initiative, this partnership also will help expand the talent pipeline that is infusing South Florida’s burgeoning tech ecosystem.

“With more than 650 FIU undergraduate students earning degrees in computing annually and 75 percent of our female computing students representing minority groups, FIU is the ideal host of the fourth Break Through Tech city in the nation,” said FIU President Mark B. Rosenberg. “Break Through Tech’s pioneering mission is well-aligned with our commitment to increase diversity and gender equality among students of one of the fastest growing computing programs in the country, advantageously located in a city that is rapidly becoming a tech epicenter.”

Through a strong collaboration with Break Through Tech and partners, FIU aims to more than triple the number of female students graduating with an FIU computing degree by 2026. Launched in 2016 at Cornell Tech with the support of academic and corporate partners, Break Through Tech’s goal is to increase the number of women graduating with degrees in computer science and related tech disciplines, particularly Black and Latina, low-income and first-generation students attending large public universities.