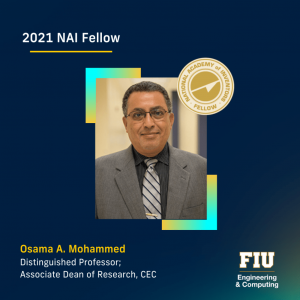 Osama Mohammed, a distinguished professor of Electrical and Computer Engineering and the associate dean of research at the College of Engineering and Computing, has been named a Fellow of the National Academy of Inventors (NAI).

The NAI Fellows Program highlights academic inventors who have created or facilitated outstanding inventions that have made a tangible impact on quality of life, economic development and the welfare of society. Election to NAI Fellow is the highest professional distinction accorded solely to academic inventors. To date, NAI Fellows hold more than 48,000 issued U.S. patents, which have generated over 13,000 licensed technologies and companies, and created more than one million jobs. In addition, over $3 trillion in revenue has been generated based on NAI Fellow discoveries.

The 2021 Fellow class hails from 116 research universities and governmental and non-profit research institutes worldwide. They collectively hold over 4,800 issued U.S. patents. Among the new class of Fellows are 33 members of the National Academies of Sciences, Engineering, and Medicine, and three Nobel Laureates. Nine other FIU researchers have been inducted as NAI Fellows over the years.

“I am truly honored to receive this very selective recognition from the NAI,” Mohammed said. “I am truly grateful and committed to continuously encouraging and mentoring a new generation of innovators in pursuing the fullest measures of their abilities and ambitions.”