FIU ranked among top 50 U.S. patent producers in the world 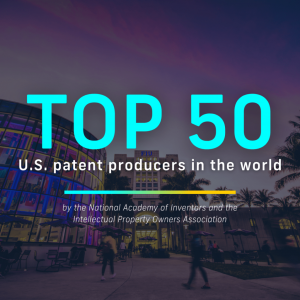 FIU ranks among the top 20 U.S. public universities in the world for the number of U.S. utility patents produced.

The “Top 100 Worldwide Universities Granted U.S. Utility Patents in 2020” report was compiled by the National Academy of Inventors and the Intellectual Property Owners Association. The report uses data obtained from the U.S. Patent and Trademark Office and highlights the vital role patents play in university research and innovation.

Many of recent patents awarded to FIU scholars push technological boundaries and provide solutions to critical problems. These patents include a device designed by Anuradha Godavarty, professor of biomedical engineering, and her team that helps doctors quickly and non-invasively diagnose diabetic ulcers under the skin; a lithium-oxygen battery that powers electric vehicles more efficiently, developed by Bilal El Zehab and Meer Safa of the College of Engineering and Computing and their team; and a novel RNA therapy that helps doctors treat lung disease on a molecular level, patented by Professors Hitendra Chand and Madhavan Nair of the Herbert Wertheim College of Medicine and their team.