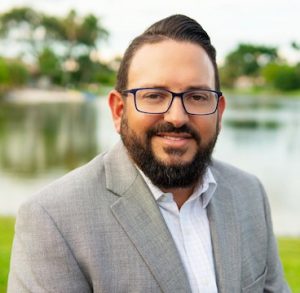 A local HVAC business, owned and operated by alumni, is the first to make a private donation toward the construction of FIU’s much-anticipated new College of Engineering and Computing building.

A&P Air Conditioning is donating $100,000 toward the construction of the approximately 125,000-square-foot, six-story facility, which broke ground on Thursday, September 9th. The new multi-disciplinary space will be equipped with makerspace labs, active learning classrooms and research laboratories in proximity to university talent, including FIU’s Academic Health Center. It will be erected on the corner of Southwest 8th Street and 107th Avenue on FIU’s main campus. The gift also benefits the $750 million Next Horizon campaign, which advances student success and research excellence at FIU.

“Our graduates know first-hand that FIU is a beacon for higher education and technological innovation,” said FIU President Mark B. Rosenberg. “FIU is already a top producer of minority graduates in science, technology, engineering and math and with nearly $200 million of annual research expenditures in this area. A&P’s generous donation is a testament that our graduates understand the value of an FIU education and share in our commitment and vision for the future.”

The $48.4 million facility is being made possible thanks in large part to a state legislative appropriation of $39 million and additional philanthropic and research funding. In February, the John S. and James L. Knight Foundation made a $10 million gift to FIU’s Knight Foundation School of Computing and Information Sciences to develop technical talent at scale to meet the demands of industry and South Florida’s booming tech ecosystem. An estimated $3.5 million of the Knight Foundation gift will fund the outfitting of the new center with best-in-class computing and prototyping equipment in support of interactive research and teaching.

“I am incredibly grateful to A&P Air Conditioning for stepping up as the first private donor to support the expansion of our engineering learning and research facilities and FIU’s vision for the future of our college and community,” said John L. Volakis, dean of the College of Engineering and Computing. “A&P Air Conditioning believes in FIU, its faculty and students. This latest philanthropic gesture is yet another testament to their generous support.”

At the helm of A&P Air Conditioning sits Adrian F. Gonzalez, an FIU alumnus who earned his bachelor of science in mechanical engineering with a professional certificate in HVAC design from FIU in 2017. A&P Air Conditioning’s co-owner and Vice President, Meyer Sarshalom, is also an alumnus who earned his BS in electrical engineering in 2008 and his master’s in business administration in 2011.

A&P’s commercial portfolio ranges from high-rises to hotels to hospitals. The company has earned its outstanding reputation among Florida’s leading contractors and developers in its 39 years of being in business. The company was named one of the Fastest-Growing Private Companies in America on the Inc. 5000 List in both 2019 and 2020. It was also selected Best HVAC Contractor 2019 in South Florida by Build Magazine.

The engineering campus expansion would position FIU to graduate an additional 350 engineers each year, create 550 jobs in South Florida, increase research spending by $30 million a year, and result in 27 additional patent applications per year

“A&P Air Conditioning is excited to be involved in FIU’s new engineering building. We are a small contractor, but we’ve always seen the value in supporting FIU, the backbone of the South Florida community,” said Gonzalez. “Now, more than ever, with Mayor Suarez’s push toward the Miami Tech Movement, we recognize FIU’s role in supplying the talent and workforce – and this new, innovative engineering building will only help prepare our students better for the future awaiting them.”

Dedicated to giving back to the community he has called home for more than 40 years; Gonzalez currently serves as vice-chair on the board of FIU-CEC’s Dean’s Leadership Council. In 2019, he established the A&P Air Conditioning First-Generation Scholarship for Future Engineers Endowment to offer scholarships in perpetuity to first-generation students at FIU majoring in mechanical or electrical engineering. The first scholarship will be awarded in the Fall 2021 semester with a matching grant from the State of Florida.

“At the heart of our Miami is its students; our future leaders who will turn Mayor Francis Suarez’s Miami Tech movement into a reality,” said Saif Y. Ishoof, Vice President for FIU’s Office of Engagement and Senior Advisor for Innovation & Technology to Mayor Suarez. “Our community coming together to help build Miami Tech is crucial for Miami’s talent to shine – talent that is created and found at our FIU,” he said.