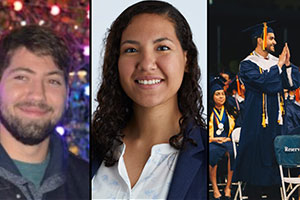 Cities like New York City, San Francisco and Seattle have long been considered the top tech hubs of the nation. Though Miami’s major industries continue to be tourism and finance, the city is emerging as an international tech hub. Talent cultivated locally sees this as an opportunity to spotlight the long-established successes of FIU students and alumni.

The recent $10 million gift from the John S. and James L. Knight Foundation to FIU’s School of Computing and Information Sciences further acknowledges the tech expertise at FIU ready to take the tech movement in Miami to the next level.

Recent grad Cesar Villa Garcia is a software engineer at JPMorgan Chase in New York. He credits his professors for preparing him for success in the workforce. While on campus, he helped build a community by founding in 2014 FIU’s chapter of Upsilon Pi Epsilon (UPE), the international honor society for the computing and information disciplines. Its members are on the frontlines of tech throughout the country and are excited to see growth locally.