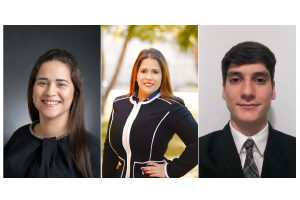 Three recent College of Engineering and Computing (CEC) graduates—two in civil engineering and the third in biomedical engineering—have received scholarships to pursue their graduate degrees from the Association of Cuban-American Engineers (ACAE) and the Cuban-American Association of Civil Engineers (C-AACE). Andy Morejon, Heily Revoll and Paola Leon Alburjas were among the recent awardees from FIU’s CEC. They each received a $3,500 award.

“The ACAE Scholarship Foundation is designed to support Cuban American and Hispanic undergraduate and graduate students as they complete their engineering education and is awarded to a select group of students annually,” said Regina Rodriguez, Ph.D., president of the ACAE. “We are thrilled to be supporting the education of these exceptional students and look forward to seeing what the future holds for these aspiring engineers.”

The ACAE was established in 1961 by a group of Cuban exiles that were determined to help eliminate roadblocks for Cuban engineers seeking employment in the United States. Over time, the founders of the ACAE have expanded their mission to not only help Cuban Americans but all Spanish-speaking engineers by promoting engineering education and providing networking opportunities.