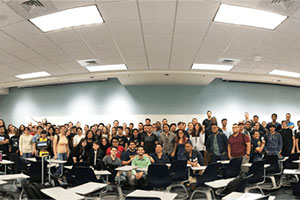 “This is the third year in a row that FIU has been selected to host the UPE National Convention,” said Peter Clarke, faculty advisor for the FIU UPE Chapter. “The extraordinary efforts of our UPE student president, vice president and members have made this possible. These students are strong leaders who continue to excel academically.”

UPE Student President Adriana Sandino and Vice President Raul Faife credit their success to their exceptional student directors and alumni advisors. The convention brings all active UPE chapters together annually to provide updates, share accomplishments and welcome newly established chapters. During the convention, the national board members also present awards to the chapters that have done outstanding work throughout the year.