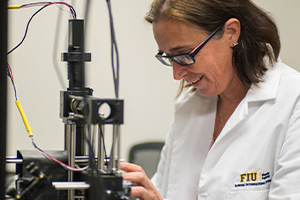 The most common, currently used, way to predict when a woman will go into preterm labor is through the use of ultrasounds, which isn’t very effective. Ramella-Roman—who is an associate professor at the College of Engineering in the department of biomedical engineering and an associate research professor at the Herbert Wertheim School of Medicine—developed a system that uses light to examine the composition and structure of cervical tissue in order to measure preterm labor risk.

The cervix, through which the baby enters the world, is made of collagen, a structural protein that gives the cervix its strength. The part of the cervix that can be seen during a gynecologic examination is known as the ectocervix, and the opening in the center is known as the os. As a woman approaches term, the pattern of the collagen in the cervix changes. It goes from being very distinctly oriented, with the proteins arranged in a longitudinal way, to being less oriented, with the proteins dispersed. Ramella-Roman’s system can detect this collagen disbursement, indicating that a woman may soon go into labor.