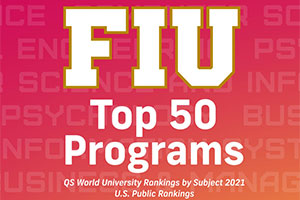 Twenty FIU programs were ranked among the world’s best, according to the 2021 QS World University Rankings by Subject.

Eight of these programs ranked in the top 50 for their category among public U.S universities. They are:

The rankings, compiled by global higher education analysts Quacquarelli Symonds  (QS), were calculated based on factors such as academic reputation, employer reputation, and citations per paper. Ranking ranges indicate a tie between multiple universities. Among these indicators, FIU earned the highest score (89) in citations per paper for its Accounting & Finance program. Overall, more than half of the programs ranked improved their positions from last year.