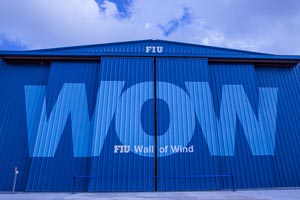 The funding will support WOW’s service to the U.S. scientific research community into late 2025. The Wall of Wind has a 12-fan 8,400 horsepower system and was inaugurated in August 2012 by FIU’s International Hurricane Research Center on the 20th anniversary of Hurricane Andrew’s devastating passage through South Florida.

WOW’s state-of-the-art testing has led to improved codes and safer buildings. Basic research at the WOW, which is part of FIU’s Extreme Events Institute, has helped researchers from all across the country refine designs and experiments for repair and retrofit of existing and new buildings, systems, and components.