Researchers in the College of Engineering & Computing have strapped themselves into the driver’s seat and entered the fast-evolving world of electric vehicle batteries. Professor Bilal El-Zahab and his team have a patent pending on a high-density lithium model that relies on platinum and related chemical elements to boost energy storage.

It is estimated that the FIU innovation could triple the mileage between charging stops. Current maximum mileage per charge for electric vehicle batteries is about 300 miles.

Set to commercialize the innovation is Lion Battery Technologies Inc. The new venture was formed in 2019 by two multinational corporations specifically looking to bring the FIU technology to market. The company jumpstarted the researchers’ work with $3 million and has plans to manufacture a product for use in consumer vehicles in three years.

As more electric vehicles hit the road, demand for high-performance batteries will only accelerate, and FIU is firmly at the wheel of the movement toward emissions-free energy.

Beyond transportation, the batteries have the potential for use in energy-grid storage—saving the power that comes from sources such as wind, water and the sun during peak production and releasing it during peak demand—and even portable electronics. 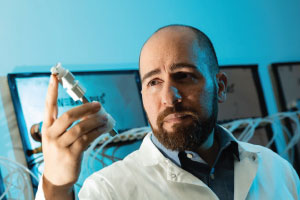