Armana S. Huq, a doctoral student in civil and transportation engineering at FIU and assistant professor at the Bangladesh University of Engineering and Technology (BUET), knows what it’s like to be a woman in the male-dominated field of engineering.

According to the Society of Women Engineers, only 13 percent of engineers in the workforce are female and only 20 percent of engineering undergraduate degrees are awarded to women. Yet, despite the statistics, Huq has become a leader in the field, developing intelligent transportation systems— and serving as a role model for other women.

A journey to civil and transportation engineering

When Huq was an undergrad in her home country, she was asked to pick an area of specialization during her last year of college. While researching transportation planning, Huq realized the capital of Bangladesh, Dhaka, had a poor transportation system. She knew this was her calling.

“The severe crash rates are what pushed me to assess and inspect roadway and traffic safety, and I found it to be a noble profession,” Huq says.

Huq recalls her father’s desire for her to become a medical doctor. 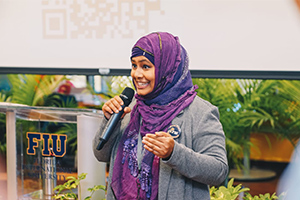