Little did Estrella Viniachi and Eloy Perez know that their educational paths would lead to love.

The pair met at a Miami Dade College international club at the start of their educational journey. They later transferred to FIU for their undergraduate degrees. Both immigrants to the United States, they are the first members of their families to achieve master’s degrees. Along the way, they married and are living their dreams with careers they worked hard to obtain.

“I was divorced with two children. I was struggling, but Eloy was a good friend and helped me with so many things. I had no family here. He was there for me,” said Viniachi, who added that their relationship began to grow slowly. Viniachi’s heart was still tender from the difficult divorce she had gone through years before. 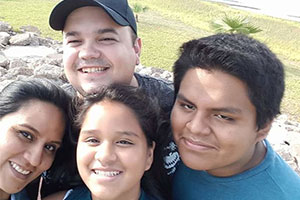