Clouds formed at Modesto A. Maidique Campus last week. But it wasn’t mother nature behind it. The Fort Lauderdale Museum of Discovery and Science mixed hot water and liquid nitrogen together to produce the cloud-like effect as part of FIU’s STEM-Weather Day.

The FIU Extreme Events Institute and the FIU College of Engineering and Computing partnered with FIU Athletics to organize a day that welcomed 2,300 elementary and middle school students from 21 Miami-Dade County schools, filling the outside plaza in front of the FIU Ocean Bank Convocation Center.

The event—which also included pizza and a Conference USA FIU women’s basketball game that resulted in victory over North Texas, 58 to 56— was an opportunity to promote STEM career fields and focus on STEM education, through interactive, hands-on, fun activities and demonstrations, which included the NSF-NHERI Wall of Wind team and wind tunnel; Engineering on Wheels; robotics; and being a TV weathercaster along with local TV meteorologists Ariel Rodriguez from Telemundo and Betty Davis from WPLG-TV. Read more at FIU News. 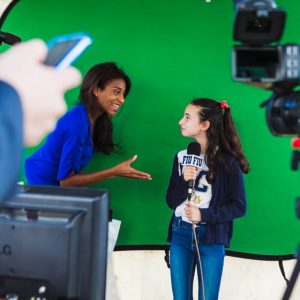