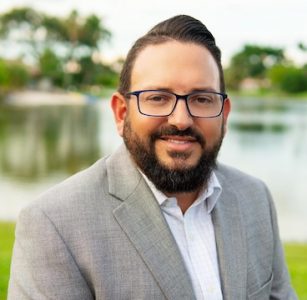 The greatest lesson Adrian learned in his 20-year career as a student at Florida International University can be summed up in his favorite quote by New York Times best-selling novelist, Michael Korda, “One way to keep momentum going is to have constantly greater goals.”

For Adrian, this meant evaluating each moment in the course of his life to determine which opportunities would yield him the most value while giving him the motivation to keep working toward his dreams. At one point, that meant forgoing a semester to work a full-time, entry-level position in the family’s HVAC business; at others, it meant doubling up on his course load at night so he could drive his daughters to school in the mornings.

Adrian ultimately achieved every goal he set. He earned his B.S. in Mechanical Engineering with a professional certificate in HVAC Design from FIU, was named President of the family business, A&P Air Conditioning, married the love of his life, Rachel (13 years and counting), and became a father to four beautiful girls, Sarah, Samantha, Sabrina, and Sandra.

This year, A&P Air Conditioning became one of the Fastest Growing Private Companies in America on the Inc.5000 list and was named Best HVAC Contractor 2019 in South Florida by Build Magazine. A&P’s commercial portfolio ranges from high-rises to hotels to hospitals. The company has earned its reputation among Florida’s leading contractors and developers as the most trusted HVAC experts by providing custom, value-engineered solutions, on-time project delivery, and never having paid liquidated damages in 37 years in business.  A&P has been awarded multiple Eagle Awards for Excellence, is certified by LEED, the American Health Care Association, and the Office of Supplier Diversity. As a local family-owned and operated business, A&P prides itself on workforce development and offering each of its 150 employees full-time employment with benefits.

In addition to his personal and professional responsibilities, Adrian’s current focus centers around investing his time and talents in the community he’s called home for 40 years. He currently sits on the Board of FIU-CEC’s Dean’s Leadership Council and is a Trustee and Board Member of the New Testament Baptist Church of Miami. He is also a founding member and former Vice Chairman of the Neighborhood Improvement Committee of Miami Lakes and former President of the Lake Glenn Ellen Homeowners’ Association of Miami Lakes. In 2019, he established the A&P Air Conditioning First Generation Scholarship for Future Engineers Endowment to offer scholarships in perpetuity to first-generation students at FIU majoring in Mechanical or Electrical Engineering.

FIU taught Adrian that those greater goals that truly provide momentum are not the ones that lie directly in front of the other and lead you down an already paved path, but rather the ones you lay beneath your own feet that will give you that extra boost to keep moving “World’s Ahead.”