Engineering Success Among Women of Color 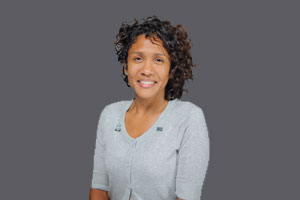 Monique Ross researches ways to retain women and minorities in computer science and engineering, while studying the factors that contribute to their career success.

Ross says her journey into engineering was not a direct line. In high school, she excelled at math, which meant you either became an accountant or an engineer. While in high school, she became pregnant with her son. She attended Elizabethtown College in Pennsylvania where she earned her bachelor’s degree in computer engineering. She honed in on software engineering because of the field’s hiring projections.

After graduation, Ross went on to work for the defense contractor, Raytheon as a software engineer for six years, but then started getting interested in teaching. She took a job as an adjunct professor at the Indiana Institute of Technology teaching senior level computer science courses. The associate dean tapped her to help launch a bachelor’s program, so she accepted the offer.

She then left the industry sector and worked for two years at Indiana Institute of Technology as the director of software engineering. However, with only a bachelor’s, she found it difficult for the faculty to take her seriously, so she returned to industry work at Raytheon, and decided to simultaneously pursue her master’s degree in software engineering and computer science at Auburn University.

This time around, she started seeing the profession through a different lens, and started asking, what made some people upwardly mobile and not others? She noticed that companies had goals to attract and retain minorities, including African-Americans and women, but then, within two years, they were gone. Around this time, she was invited to attend an open house at Purdue University for their Engineering Education program. She had gotten married, and had two more kids, and felt now was a good time to go back to school to get her Ph.D. She would drive three hours once a week to attend classes, and when that became challenging, she quit work so she could focus on school full-time. While working as a research assistant, she developed a good relationship with students, and realized she really wanted to focus on teaching and research on a full-time basis.

Ross joined FIU in fall, 2016 because as a minority-serving institution, it served as the frontline for her research. She is examining methods of retaining women, and people of color by expanding her qualitative inquiry into black women’s experiences in the engineering industry to other women of color. Her second area of research focuses on content, assessment and pedagogical alignment in discipline-based engineering education in order to impact graduation rates of underrepresented minorities. Ross uses research designed around discipline-based engineering education to then inform pedagogy utilized in computer science courses. The goal is to spark more interest in computer-related engineering careers, and contribute to the retention of women and minorities in these fields. Ross believes that by revising courses for proper alignment, retention can be increased.

In her research endeavors, Ross has examined black women in the engineering industry, their experiences, and the mechanisms they have invoked in order to remain engaged in a field that has historically been perpetrated as being unwelcoming to women and minorities. While their experiences were vast, there were similarities amongst them with regards to their navigation to, and through, engineering – resilient engineering identity development that aligned with their whole selves, “know thyself;” achieving personal and professional alignment; “lift as you climb,” where women mentor each other; and developing authentic work relationships.

Now at FIU, she’s expanding her research to better understand the motivations of Black and Hispanic women that have chosen a computing field as an occupation, in order to better target marketing, informal learning, etc. to the next generation of computing professionals – in particular little girls that look like her – Black and Hispanic.