Behind the scenes of innovative research 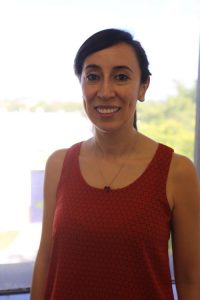 A passion for Isaac Asimov’s science fiction books led Liliana Rincon Gonzalez to pursue undergraduate and graduate degrees in biomedical engineering, with the hope of focusing her research on the human brain. She had no way of knowing at the time that her passion for science fiction, and books about robots with brains, would lead her to pioneering work that could one day allow amputees to feel what their robotic hands were doing.

After graduating with her undergraduate degree from Arizona State University (ASU), she went straight into the biomedical engineering doctoral program at ASU, and decided to focus on neuroscience. She researched how people perceive their bodies in the space around them, also known as proprioception, and the interaction between touch and proprioception. For example, if you close your eyes, your body may sway a bit, but then if you touch something, it makes you feel grounded, and that is the relation between touch and proprioception.

During that time, College of Engineering and Computing interim dean, Ranu Jung, was also at ASU researching a prosthetic hand system that aimed at restoring the sense of touch and hand opening to amputees. Rincon Gonzalez’s research had applications to Jung’s work. If researchers could understand how we perceive proprioception and touch, then that might help them implement that knowledge in a prosthetic device that could interface with the nervous system.

After graduating from ASU, Rincon Gonzalez had the opportunity to explore different areas of research when she became a postdoc at Radboud University in Nijmegen, the Netherlands. While there, she studied how people make motor decisions, and the relationship between the vestibular system and decision-making. For example, why does a person kick a ball with one leg and not the other. She worked in this area for a year and a half before joining her now-husband in Miami. 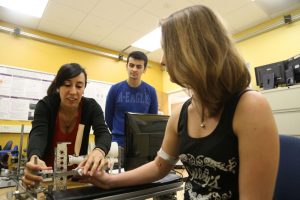 As fate would have it, Jung was now working at FIU so she reached out to her, and was offered a job as a research scientist and research coordinator for an amputee trial that Jung had coming up. Rincon Gonzalez’s human subject experience, as well as her work in proprioception and touch, made her the perfect match for the job.

As a research scientist, she ran a few studies on able-body subjects to get ready for the main study. But it was while working on the research coordination side that she realized that she really enjoyed working with all the regulatory aspects of the project, ensuring compliance, writing grants and obtaining approvals from the Institutional Review Board (IRB). Part of her role also involves mentoring undergraduate students in the lab.

The next step for Rincon Gonzalez is recruiting people for the clinical study. Once the IRB gives its approval, she will be responsible for the hardest part – finding transradial amputees to participate in the study. (A transradial amputation refers to an amputation between the elbow and wrist.)

The goal, says Rincon Gonzalez, is to help amputees be able to feel what the prosthetic hand is touching, and know how open the hand is without having to look at it all the time, and that it feels as natural to them as if they still had their limbs. All of her research on the brain and interactions between proprioception and touch helped prepare her for this role that is poised to change the lives of upper limb amputees.