About five years ago, a small group of FIU engineering students decided they wanted to build a Formula 1 race car, ship it up to Michigan, and compete against the top engineering schools from around the world in a design challenge.

They did it in 2012, and they’ve entered the Formula SAE race car design competition every year since. 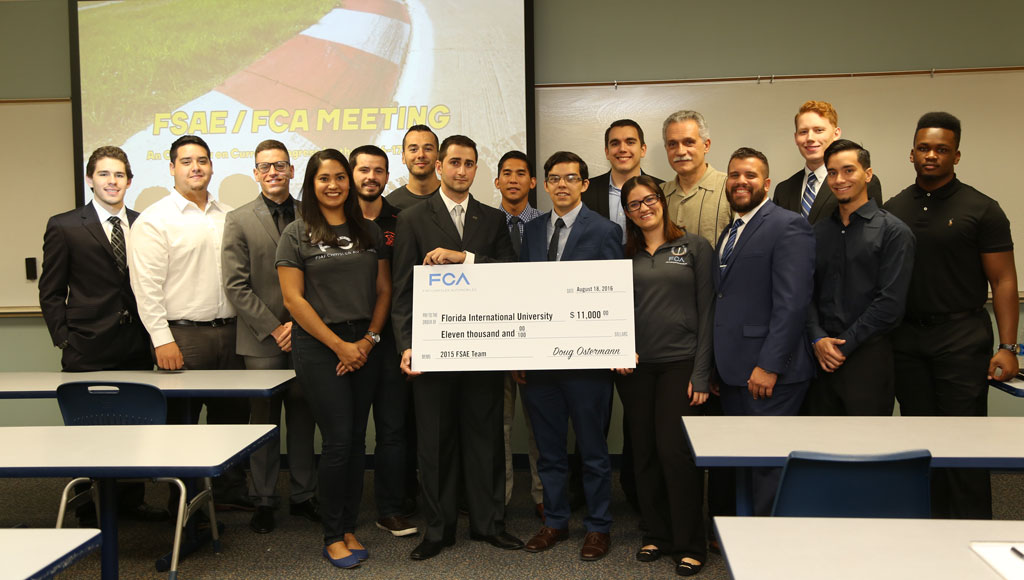 The first competition was held in 1979 in Michigan, and it has been held there annually ever since. A second competition is now held annually in Nebraska, but Michigan is the largest of the two, held at the Michigan International Speedway.

To get started, FIU students created a student chapter of the SAE, the FIU-SAE, co-founded and overseen by the faculty advisor, Andres Tremante. Recently, the club decided to step up its game and establish an executive board with elected positions. After all, Formula SAE is no race around the block, but a highly visible, highly competitive, high-stakes competition, against generously sponsored teams spending upwards of $100,000 on their race cars.

Why the hefty price tag? Well, race car designs are evaluated for speed, weight, affordability, and reliability. The contest rules require that the car have certain features, but anything else on the car should only be there if it makes the car go faster. Design creativity and innovation in automotive engineering are key aspects of the competition, but so is the cost report and presentation, the sales presentation, and the performance of the race car on the track. Materials and parts, registration fee, race car shipping, travel to Michigan for the team—it all adds up.

FIU-SAE started small, with a budget of $7,000 in 2014. The team passed its first two technical inspections that year and finished 95th out of approximately 120 teams. The car was praised for its simplicity, a significant accomplishment for a newer team.

In 2015, the team was able to increase the car’s budget to $15,000, thanks to a partnership it formed with Fiat Chrysler Automobiles (FCA), which donated $11,000 to their cause. Chevron helped the team cover travel expenses with a gift of $8,000. This was a great year for the team: it passed all four technical inspections and competed on the track for the first time. The team finished 102nd overall after faltering in the acceleration event, but it came away with a lot of lessons learned to apply at the next competition.

Competing against schools that have been participating in Formula SAE for decades is no easy feat. Through continuous research, testing, and tweaking, infused with newly raised funds for upgrades, and reinvigorated with the fresh ideas that each new team member brings, a team’s race car is improved with each year’s competition. So being the new race car on the block has its disadvantages.

Gearing up for the 2017 competition, the design team recently gave a presentation to its sponsor, FCA, on its progress. Led by the newly formed executive board, the team presented the budget, and the chief engineer and upper-level managers presented the current and future goals for their respective units: electrical, aerodynamics, ergonomics, powertrain, suspension, chassis, and drivetrain. The team was asked questions by their four FCA mentors—all FIU engineering alums and former FIU-SAE members who now work at FCA.

Although the team primarily highlighted improvements made to the car during the presentation, the discussion that followed really drew out the recent changes that have strengthened the team.

To start, the FCA mentors’ support and guidance have been invaluable. They have been meeting with the team every week, remotely from Michigan, offering critiques and professional input on day-to-day problems with building and testing the race car. “Being on the phone helps us avoid errors we’d make in the senior design presentation,” one team member said, referring to a presentation that is part of the Michigan competition.

Team members also pointed out that having an e-board has given the team much-needed structure. The organization is also more visible on campus, and more students are interested in joining, which brings in new talent and expertise. Another teammate pointed out, “The club is more welcoming, especially to new freshmen.”

For Tremante, one of the most critical developments for the team is the fact that it now has a place to meet. Students meet and work in OU (Operation/Utility) Building next to the Engineering Manufacturing Center.

Matthew C. Reynolds, who works in fuel economy planning and regulatory fleet compliance at FCA and who oversees four FCA mentors, said after the presentation, “This is the strongest leadership team I’ve seen from FIU so far.” Past FIU-SAE president and chief engineer Juan Trujillo agreed. “The chemistry on the team has been great.”

For the FIU-SAE team, the race car competition is an opportunity to put engineering principles into practice, but it also means spending enough time under the hood to figure out what makes the team tick and then fueling it with that winning Panther attitude.