Spotlight on College of Engineering and Computing Graduates

Mustafa Farhadi knew he’d grow up to be an engineer. As a kid in Ghaemshahr – a city in northern Iran – he toyed with electrical devices in his home, and family members always asked him for help when something broke.

He came to FIU’s College of Engineering and Computing in fall 2011 to pursue a Ph.D. in electrical and computer engineering, under the mentorship of Professor Osama Mohammed. Since then, Mustafa, 32, has conducted groundbreaking research on hybrid DC power systems, leading to six papers being published in Institute of Electrical and Electronics Engineers (IEEE) journals; and he has presented at 13 international conferences. His efforts, as part of FIU’s Energy Systems Research Laboratory, have been significant in developing new energy management techniques and protection schemes for hybrid DC power systems. The techniques could improve the use of renewable energy by improving efficiency and power quality as well as reliability, which means fewer power interruptions.

A teaching assistant and laboratory instructor for three years, Mustafa is also the founder and chair of the IEEE Industry Applications Society student branch chapter at FIU.

Currently job hunting, Mustafa hopes to obtain a job where he can apply his research to real life. He also got married last year, and said his wife, Samaneh, has been a tremendous source of support in his educational pursuits. 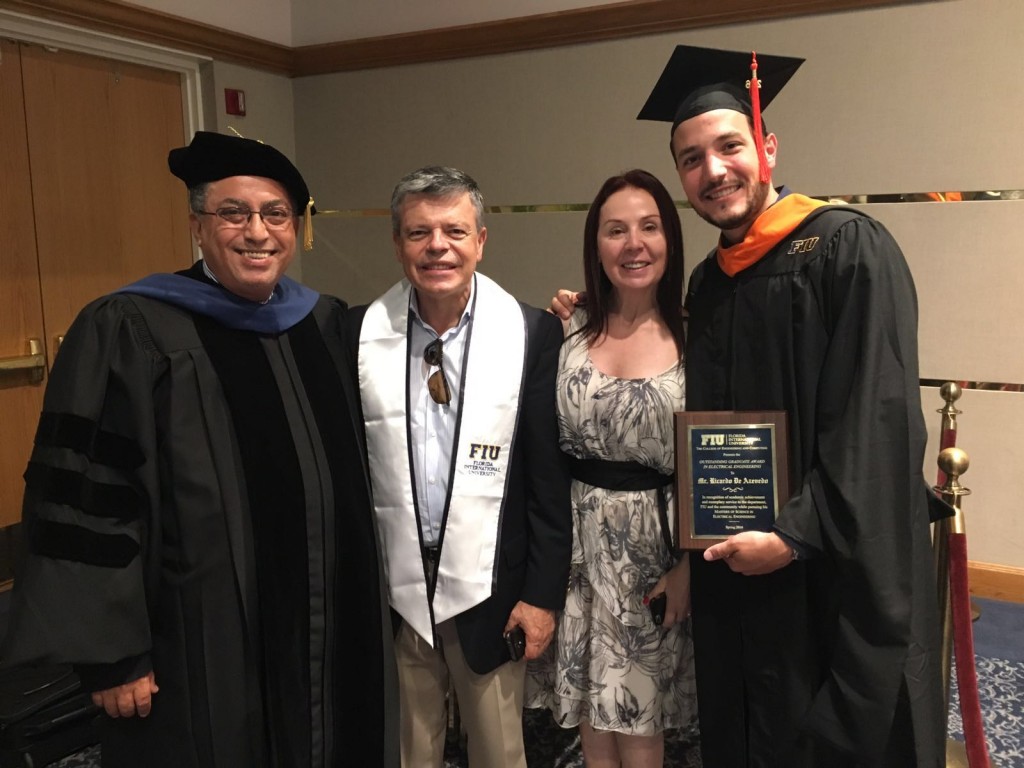 Ricardo de Azevedo with his parents and Professor Osama Mohammed

Sparked by a passion for renewable energy, Ricardo de Azevedo Figueira traded a finance career in New York to pursue a master’s in the Magic City.

After he obtained his bachelor’s of science in electrical and computer engineering from Rice University in Houston, Ricardo packed his bags and went to New York to work as a software engineer for Wall Street firms. He realized finance was not for him so he came to South Florida to try his luck as a small business entrepreneur. He opened a frozen yogurt shop and gained priceless experience, but still felt a void. Fueled by his interests in renewable energy and climate change, he decided to return to school at FIU’s College of Engineering and Computing for his master’s in electrical engineering.

Ricardo’s academic research focuses on innovative decentralized control schemes for microgrids to help implement renewable energy and energy storage in the evolution towards the Smart Grid. He’s published several papers, and currently has one under review for the most prestigious scientific journal in his field of study, IEEE Transactions on Smart Grid.

The Venezuelan-born graduate is a Spark Clean Energy Florida Fellow and was awarded Outstanding Master’s Student in Engineering for Spring 2016. He graduated with a perfect 4.0 GPA. Ricardo, a first-generation university graduate, credits his parents for providing him with the support and encouragement necessary to succeed.

Ricardo also volunteers his time to TECHO, a nonprofit that mobilizes youth volunteers to fight extreme poverty in Latin America. After graduation, he hopes to focus efforts on energy storage there, as Latin America is a technologically underserved market with vast renewable energy potential and a need for novel solutions. 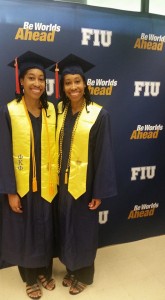 Shonda and Shalisha Witherspoon share a remarkable bond – identical twins, their special connection existed before they were even born.

They are more than sisters; they are a team. From being homeschooled to attending college – they have remained side by side. Their educational journey will culminate in them graduating together with bachelor’s degrees in information technology – and 3.95 GPAs, the highest in FIU’s College of Engineering and Computing for spring commencement.

The twins grew up in a family of six children and discovered their love of technology through their oldest brother. Even though the family struggled to pay for their studies and minority women remain greatly underrepresented in STEM disciplines (Science, Technology, Engineering and Mathematics), Shonda and Shalisha were undeterred.

They are also on the executive board of FIU’s Study Abroad Club, where they serve as advocates, encouraging minority students and STEM majors to participate in study abroad programs. They have spoken at several events about their own study abroad experience in Japan.