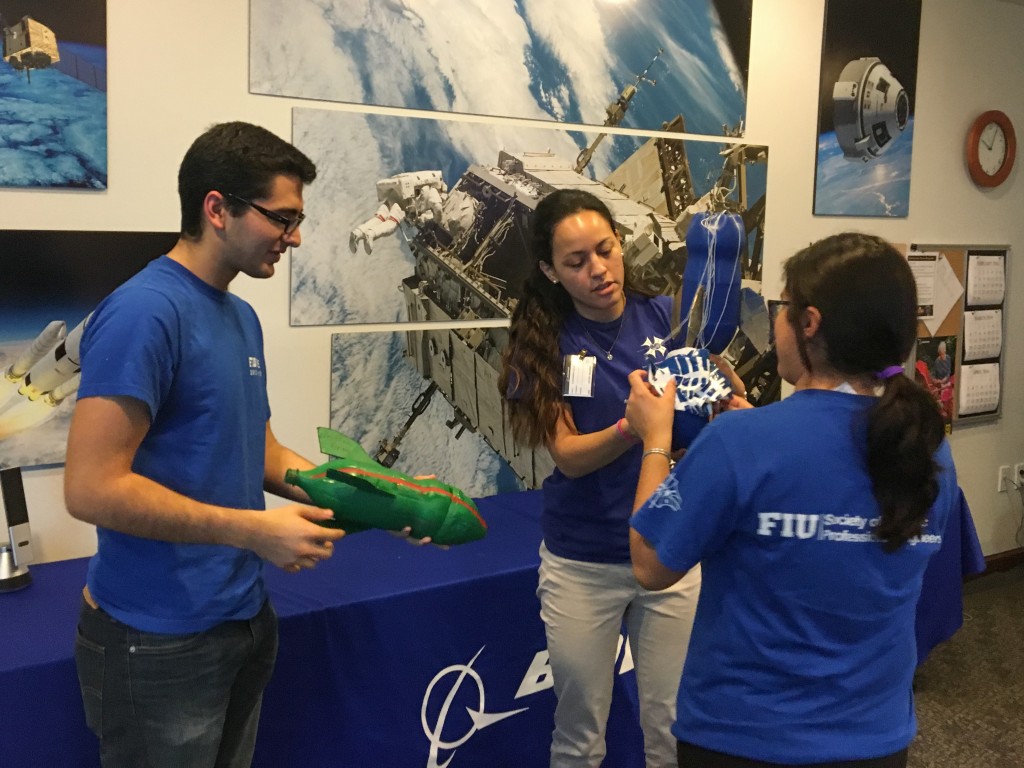 After joining the Aerospace Engineering Club, mechanical engineering major Jorge Cisternas realized he wanted a job in the aerospace industry.

And recently, Cisternas, now the president of the club, got one step closer to his goal: he visited Boeing Florida Space Coast in Titusville and networked with professionals in the field.

This week he and his fellow FIU engineering students left their mark at Boeing Titusville during the company’s annual Bottle Rocket Contest. Aside from winning first and second place, students also took a decisive step in establishing and strengthening a relationship with the company.

For the first time FIU students – from Aerospace Engineering Club (AEC) and the Society of Hispanic Professional Engineers (SHPE) – were invited to attend the contest alongside students from the University of Central Florida, Florida Institute of Technology and Embry-Riddle Aeronautical University.

“It’s awesome,” mechanical engineering Major Alexsandra Olaya says. “What was most important from this experience is they [Boeing] saw enthusiasm from us. We left a really good impression on them and they were really proud of us, in general with the rocket, and FIU building this new relationship with them.”

Olaya had previously visited Boeing Titusville with several other SHPE executive board members after contacting Scott Southwell, Boeing Florida Space Coast Operations engineering director. She was glad to see Southwell mention he was very happy for FIU students to be part of the competition and give her a shout-out publicly. 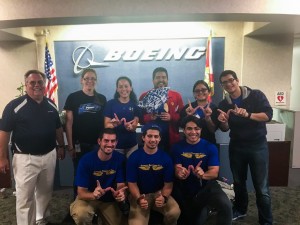 “We’re getting our name out there as an engineering school. After today, we definitely helped open more doors not just for ourselves, but for future students – that can come [to these kinds of events] in the future.”

The competition, held during Engineers Week, combines a fun engineering challenge with a valuable networking opportunity to meet professionals at the company.

“We enjoyed their visit. We met some really nice students, and we wanted to welcome FIU back and make sure they got the invitation to this particular event.”

The contest portion of the event involved designing a 2-liter plastic bottle rocket, filled with water and air, to have the longest-lasting flight-time in the air. Students could design up to two rockets.

FIU’s two rockets won first and second place, both lasting more than 12 seconds in the air, and edging out the next-highest placing bottle rocket by about five seconds.

Students also learned about the types of projects engineers at Boeing are working on, including  designing the rocket that will take people to Mars. And they got to learn about different parts of the rocket and different products the company makes.

A few lucky FIU students who arrived early got to see computer CAD models of various parts of the rockets such as the core stage of the rocket, where the engine belongs. The engineers even gave them the scoop about why some parts of the rocket are designed a certain way for increased performance.

Cisternas enjoyed getting to immerse himself in the day-to-day life of engineers.

“They showed us what they do and what they did with their engineering degree – this is what a mechanical engineer will be doing. That was awesome.”

Cisternas adds: “Getting that one-on-one experience, the networking opportunity, was the highlight. Getting to know people and establishing the relationship.”

“Boeing is also interested in doing [this] because we are always trying to get the best talent we can get,” Torres says. “Through these activities we can determine good candidates for future jobs – you establish those relationships, and in the future they start paying off for both ends.”

Just one reason Boeing will keep FIU in mind for a while: on the last launch, one of the FIU rockets got blown into the tree outside Boeing’s front door. FIU’s bottle rocket still sits outside Boeing.

“We were immortalized on Boeing’s facility,” Jose Medina, one of the engineering students, laughs as he thinks about that rocket stuck in the tree. “They will never forget us.”