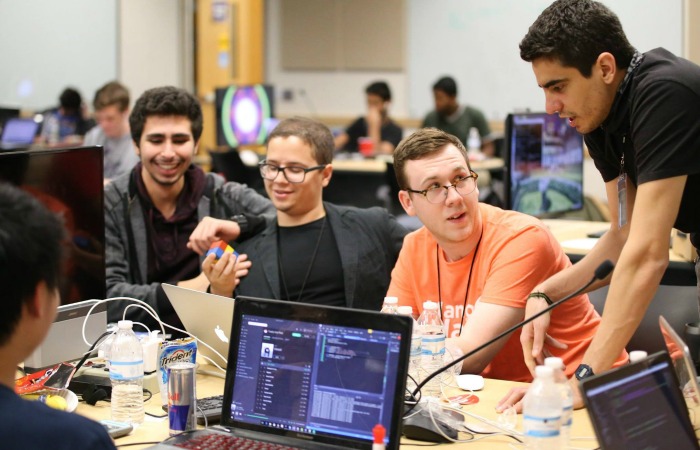 Sleeping bags and pillows were strewn around classrooms in PG 6 Tech Station while a few students took a quick nap or ate breakfast as the final day of MangoHacks began. Many were tired, but they were the proud survivors of 36 hours of coding and building.

The students had accomplished their goal: to create a project in one weekend, during one hackathon.

Nearly 250 students from all over the state and even across the country spent March 4-6 at Tech Station for the first large-scale, student-led hackathon hosted at FIU. They whipped up more than 30 projects, including a Smart Mirror that can bring up a live news feed and information about the weather and maps; an app that helps connect communities face-to-face; and a role-playing game that allows users to learn Spanish, Portuguese or French.

“This is wonderful. It’s absolutely amazing to have a chance to program with my friends,” FIU electrical engineering major Angelo Saraceno said. “At hackathons, everyone brings something to the table, whether you are a data scientist or a designer or a marketer. [It’s great] when everyone comes together and they are able to make beautiful things happen.” 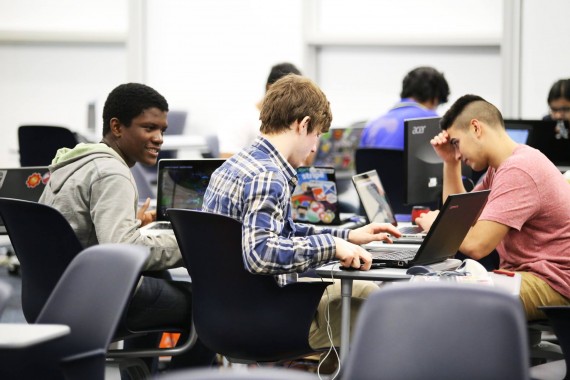 One of Saraceno’s teammates and FIU statistics major Krista Shuckerow added: “When you have an environment with lots of different people from lots of different backgrounds and a shared interest, you can come up with something you wouldn’t have been able to do by yourself. You have something valuable [you’re trying to make] and you pull your own weight.”

Their group won second place with Belated, a plugin to manage and prioritize messages for people catching up with conversations on Slack, a chatroom-like program. The group plans to continue working on their plug-in and possibly expand it to work for more applications in addition to Slack.

FIU computer science major and chief organizer of MangoHacks Juan Alvarado said one major benefit of having a hackathon at FIU is it “creates a community where you can meet people from other majors, other schools, and have an environment where you can think and not worry about anything else. The only outcome could be that you have a good idea that could become a business.”

Another team created the Gethr app with which users can post events and see what people on their Twitter or Facebook groups are posting, and what events are happening.

“It’s connecting similar people with similar events,” FIU business major Edison Espinosa explained. The team plans to continue work on their app and they hope to become one of the first completely student-run startups in Miami.

FIU student Jaime Acevedo and Adrian Rodriguez also saw the potential to help the community through the event. “We decided to build something that could solve a problem,” Rodriguez, computer science major at Miami-Dade College, explained. 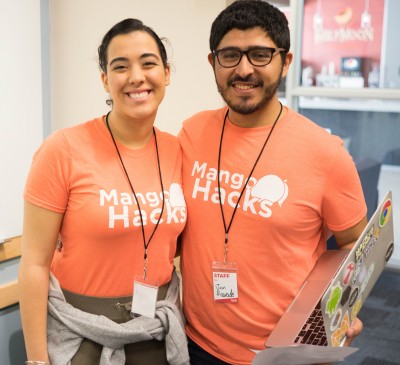 Their project: building WalkR, a low-cost, smart prosthetic leg that can adjust its size automatically according to the angle the prosthetic leg is bent.

Saraceno said while winning an award is great, victory at hackathons means much more than a medal. “Even if we didn’t win anything, we still won because we were able to solve a problem we and other people were facing.”

The top three finishing teams at MangoHacks are:

First place: Caeley Looney from Embry-Riddle Aeronautical University and Gene Chorba from Georgia State University with their Emote app, designed to identify the emotion on someone’s face in an image.