Shekhar Bhansali has been elected a Fellow of the National Academy of Inventors. 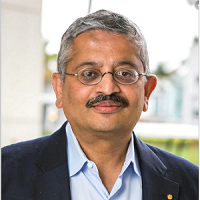 Shekhar Bhansali, the Alcatel-Lucent Professor and Chair of the Department of Electrical and Computer Engineering, has been elected a Fellow of the National Academy of Inventors.

With more than 24 patents, Bhansali is the third faculty member from the college to receive this honor. He joins Sakhrat Khizroev, professor of Electrical & Computer Engineering, and Ram Iyengar, director of the School of Computing & Information Sciences, who were inducted in 2013 and 2014, respectively.

Election to NAI Fellow status is a high professional distinction. Academic inventors and innovators elected to the rank of NAI Fellow are nominated by their peers for outstanding contributions to innovation in areas such as patents and licensing, innovative discovery and technology, significant impact on society, and support and enhancement of innovation.

A prolific researcher, Bhansali has published more than 200 journal and conference papers in addition to editing two books and five book chapters. His research in the areas of bioengineering, oceanographic sensing, materials science and alternative energy has received support from NSF, industry and national laboratories. Bhansali has received numerous awards, among them the 2003 NSF CAREER Award. He is on the editorial board of the Institute of Smart Structures and Systems.

Bhansali came to FIU in 2011 after spending more than a decade at the University of South Florida, where he built a program that was among the top 10 Ph.D. producers for Hispanic Americans and African Americans. His work as a mentor has been recognized numerous times, including the 2009 and 2011 William R. Jones Outstanding Mentor Award from the Florida Education Fund and the 2009 Mentor of the Year Award from the Alfred P. Sloan Foundation.

Among his inventions are an integrated nanowire/microelectrode array for biosensing, a method for fabricating magnetoelectric nanoparticles and a hydrogen senor.