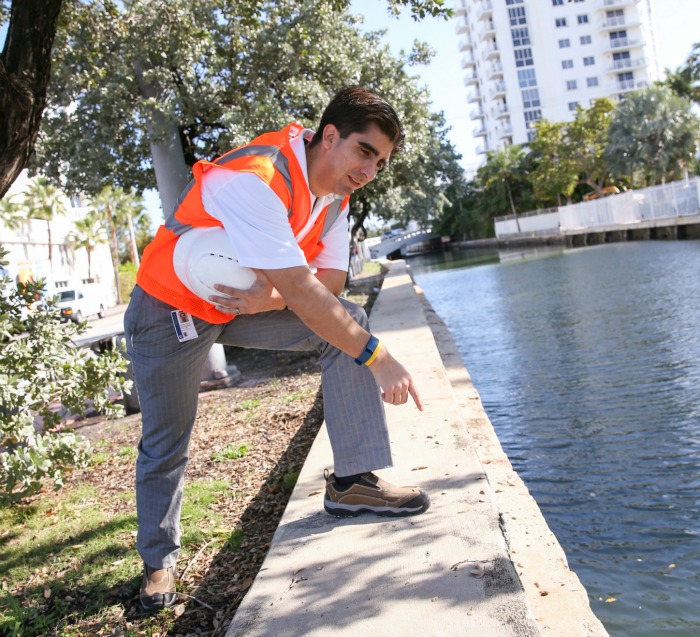 When Carlos Tamayo started sitting in on meetings between FIU and the City of Miami Beach, he had no idea the experience would eventually lead to a career in local government.

As a doctoral candidate researching sea level rise, Tamayo was interested in the university’s collaboration with the city to mitigate the effects of climate change.

Because of his involvement in those early committee meetings, Tamayo was given the opportunity to present his research – which focuses on barrier systems that may be able to protect coastal areas – to the group.

When city officials announced they had internship openings for graduate students from FIU, Tamayo applied immediately. He was hired by the public works department and, after just four months on the job, Tamayo found himself working fulltime as a civil engineer for the city.

“The opportunity to work in Miami Beach – because of what they are doing with sea level rise – was huge to me,’’ said Tamayo, who earned his master’s degree in environmental engineering from FIU in 2010. “When I applied for the internship, I certainly hoped it might become fulltime. It just happened quicker than I thought.’’

Tamayo is the first FIU student intern to be hired by the city full time. City engineer Bruce Mowry, who hired Tamayo, said he was the city’s top choice – for two positions. 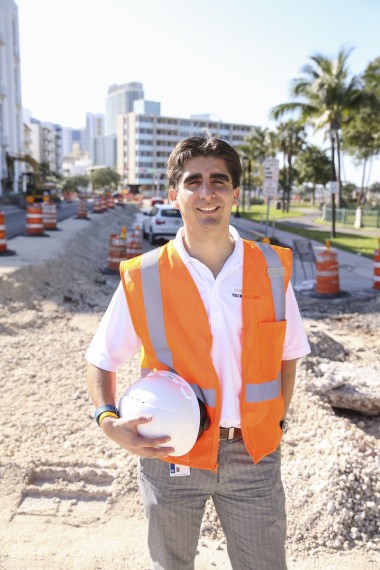 Carlos Tamayo turned a successful internship with the City of Miami Beach into a fulltime position as a civil engineer with the city.

“Carlos is an outstanding young engineer who is eager to learn new things and take on more responsibilities,’’ Mowry said. “The environmental group wanted him but the engineering group was able to show that he was more valuable to the city in our department.”

While Tamayo’s research was not the deciding factor – Mowry said he would have hired Tamayo regardless – it did help.

“His work on developing a model to be used for planning for the future is a critical activity to meet the challenges of climate change and sea level rise,” he said.

Through a partnership with FIU, the city provides as many as 24 internship positions each year to undergraduate and graduate students in everything from arts, history and culture to transportation, engineering, public administration and the environment.

“The opportunities this partnership presents for us and the FIU family are truly worlds ahead as we continue to build our commitment to education,” said Miami Beach City Manager Jimmy L. Morales.

The university’s collaboration with the city extends beyond internships.

FIU participated in the city’s centennial celebration last year and is also assisting in the areas of transportation, education and youth development.

“Our partnership with the City of Miami Beach has led to so many great opportunities for our students, staff and faculty,’’ said Caryn Lavernia, assistant vice president in the Office of Engagement, which oversees the partnership. “It’s so gratifying to see that one of our talented students is now following his dream in such a meaningful way.’’

Tamayo said he is happy that his work at FIU may have real-world implications in Miami Beach – and possibly beyond.

“My research is around the assessment of engineering solutions for sea level rise,’’ he explained. “My benchmark is Miami Beach but there are potential applications worldwide.”

It’s an issue he believes Miami Beach is taking seriously – and working hard to tackle.

“From a technical aspect, compared to other coastal cities, Miami Beach has done so much more,’’ he said. “The issue is so severe but in terms of adaptation strategies and execution of projects, we are leading the way.’’

The City of Miami Beach will accept internship applications for the Summer 2016 semester from Feb. 1 to March 4. To apply, click here. For information on the program, call Alexina Alonso at (305) 348-3476.