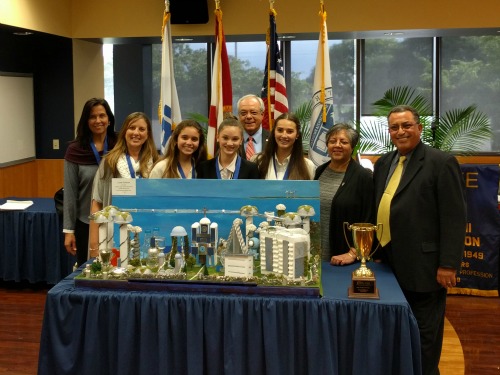 Middle school students with posters and pointers in hand smoothed their blazers and business casual clothes and faced the do-or-die moment: the final team presentation at the Future City regional competition.

Some began their presentations by getting “in character” as mayor, investor or engineer, as they discussed this year’s theme, “Waste Not, Want Not” –– effective waste management techniques in the future –– from the perspective of each of these professionals.

It may sound like cute role-playing, but on Jan. 16 at FIU’s Engineering Center there was something incredibly intelligent and inspiring about it.

“It is amazing,” College of Engineering and Computing Interim Dean Ranu Jung says, “to see the technical knowledge the students have. And it’s wonderful to see young boys and girls saying ‘we, the engineers and investors’ while providing global solutions.”

Future City is a national competition in which groups of middle school students present their idea of what a city would look like 100 years from now and how that city would effectively deal with the demands of a global sustainability problem.

The project involves several components: a virtual model of the futuristic city, a physical model of a section of the city, an essay and a presentation. The students work with guidance from their teacher and an engineering mentor. 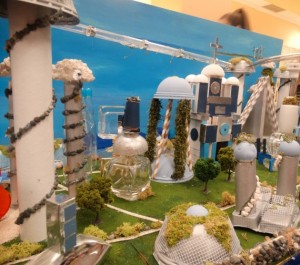 “We wanted to develop the future engineers, attract them to the field. This is what matters,” says Osama Mohammed, a professor in the Department of Electrical and Computer Engineering who has organized the event for the past 14 years. “This event is supporting a lot of future engineers.”

One of the biggest things Cristina Jugo, an eighth grader at St. Hugh Catholic School, says she learned from the project: learning to think like an engineer.

“It’s not just where you put the building,” Jugo explains. “It’s the land, the equipment, how many inhabitants there are, the wildlife. It takes so much more.”

Alexis Roque-Bringas, an FIU alumna and Hammocks Middle School teacher, says of what her students accomplished: “It’s fantastic. These competitions give them the experience of what it’s like to be real-world engineers and solve real-world problems.”

With two of the top three presenting teams led by all-female speakers, the future of females in STEM looks brighter. Jugo, for example, is currently considering whether she would like to become a computer engineer or a petroleum engineer.

The winning team, from St. Hugh Catholic School in Coconut Grove, will be attending the National Future City competition next month in Washington D.C.