“I promise you, this is not a prank call,” Deborah Frincke, who leads the National Security Agency’s (NSA) Research Directorate, told FIU’s School of Computing and Information Sciences (SCIS) Professor Geoffrey Smith over the phone.

Frincke confirmed to Smith that a paper he wrote along with five collaborators won NSA’s third annual Best Scientific Cybersecurity Paper Competition. The competition was open to all scientific cybersecurity papers published during 2014, and a total of 50 papers were nominated.

“It is fantastic to have a faculty member of this caliber, whose innovative research has been recognized nationally, amongst us,” College of Engineering and Computing Interim Dean Ranu Jung said. 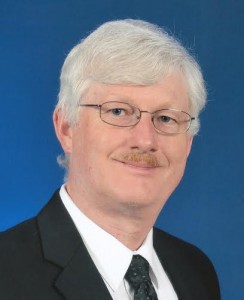 “An award of this magnitude has never happened to me,” Smith, who first arrived at FIU in 1994 and became a faculty member in 1998, says. “We had no idea something like this could have happened.”

“This is a hard problem. By its very nature, it’s hard to deal with the fact that some sensitive information has to flow. Some information will have to leak,” Smith says.

For example, to come up with a result of elections by secret ballot, some information from those secret ballots must be revealed, especially in cases in which the winner is unanimous.

Work in the field of quantitative information flow began in the early 2000s, and Smith and his collaborators are doing their share to continue turning up innovative results in the area. “The field is one that my collaborators and I have been pioneering in recent years.”

“The thing that is most exciting about this award is that it will help quantitative information flow become more visible,” Smith said. “This is work that is promising, important and can be improved.”

The winning team of collaborators exemplify collaboration at its best – a truly international team with members based in France, Brazil, Australia and the United States. Smith says: “With absolute certainty, none of us could have done this individually. It was great to be able to fit into a group of people and hold up my end of the deal. They are great.”

Smith and his collaborators will be recognized at an NSA award ceremony in November.