Using lasers to heal scars caused by third-degree burns or past surgeries. Redesigning microscopes in order to place them inside people for imaging and treatment purposes. Using spectrometers to determine the pH level of the milk that will be sold in supermarkets.

These were some of the items and topics discussed at a Photonics in Healthcare mini-symposium hosted by the Department of Biomedical Engineering on April 3.

Photonics – the science and technology of generating, controlling and detecting photons, which are particles of light – may be on the brink of emerging as one of the key technologies of the 21st century. This year has been deemed the “Year of Light and Light-Based Technologies” by the United Nations. The U.N.’s goal is to focus on the topic of light science and its applications in health, energy, education and other areas. The mini-symposium is a part of a series of events and seminars FIU is hosting in recognition of the U.N. initiative.

Ranu Jung, chair of the Department of Biomedical Engineering at FIU, sees photonics as a multi-disciplinary science that can bring together faculty from a wide range of areas. 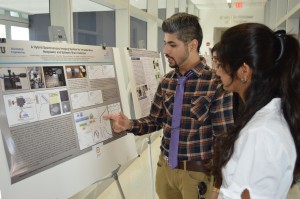 “Putting this together was an opportunity to bridge engineering and medicine, giving us the ability to do transformative research that leads to transformative education to help students succeed and become leaders,” Jung said.

Having this group of leaders in photonics come to FIU also helped give the university a chance to learn how to advance its own photonics research.

“Bringing in this group to give us guidance and the opportunity to see what they are doing helps us think how we can grow this effort and what we can do moving forward,” Jung said. 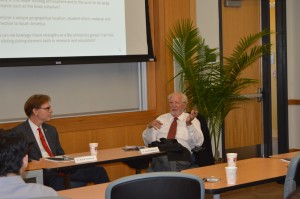 Tromberg, who is also the director of the Laser Microbeam and Medical Program at the Beckman Laser Institute, discussed how photonics is moving toward bringing technology to the patient and creating low-cost, low-barrier access and treatment for patients.

New personal health monitoring technologies on devices, like the soon-to-be-released Apple Watch, will be opening new opportunities for photonics and health.

Using a technique he helped invent called Fraxel (or Fractional Photothermolysis), Dr. Manstein uses small, focused lasers to treat burn scars, remove unwanted fat and more. In the future, he hopes that his laser technology could regenerate tissue in vital organs like the heart and liver.

Morris shared how he bucked conventional wisdom and created thriving businesses in photonics; he developed more than 2,000 products, which included creating spectrometers – devices that can detect, record and measure spectral lines and measure their wavelength or intensity – some of which ended up being used by NASA to record data on the moon. 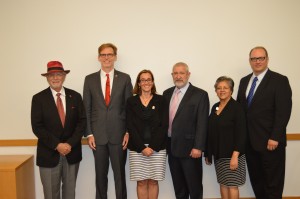 Ricardo Siu, who is seeking a doctorate degree in biomedicine at FIU and attended the mini-symposium, says the event helped him see how photonics could be used to help him with his own studies moving forward.

“You can use light to measure anything,” Siu said. “A lot of the research and the ideas the speakers talked about are concepts that resonated with what I want to do with my research projects and my Ph.D.”

After the presentations, a panel discussion featuring all three speakers and Dr. Herbert Wertheim, for whom the FIU Herbert Wertheim College of Medicine is named, discussed a number of topics regarding the future of biomedical engineering, photonics and the push to complete large scale projects and national initiatives.