Second in the nation and sixth worldwide: that’s how FIU placed at its first remote-controlled plane competition.

The group of engineering students travelled to Lakeland, Fla., to compete in Lockheed Martin’s SAE Aero Design East competition against 74 other schools from around the world, including schools like Texas A&M, the University of Cincinnati and aerospace academies from Brazil.

FIU’s remote-controlled plane, which the group designed and built for the first time this year, beat out models from schools like the University of Michigan and Rutgers University, which are known for their aerospace programs and have competed before.

“It was amazing for the first time out at competition that they ranked so highly, especially against a lot bigger, better-established schools,” said the club’s faculty advisor, Brian Reding, a coordinator of special research programs in the Department of Mechanical and Materials Engineering.

The aerospace club was founded a year ago as a way to give students hands-on experience building what they learn about in their engineering classes. It evolved from the mechanical engineering capstone class, which requires that students design and build something that demonstrates the concepts they’ve learned throughout their studies.

“Aerospace classes are mostly theoretical, and this is hand-on,” said club member Jorge Cisternas, a junior majoring in mechanical engineering. “And you get teamwork experience. It helps us go beyond what we learn in class and apply real-world skills.”

Usually, the only weight a remote-controlled plane carries comes from its electronics and motor. But the purpose of the competition was to challenge students to design a plane to carry a maximum amount of cargo without crashing.

“When companies like Boeing decide to make the next cargo plane, these are exactly the criteria they’re looking for: max payload and takeoff distance vs. landing distance,” Reding said.

FIU managed to design a plane with a payload of 19 pounds—the plane itself only weighed 15 pounds. To put it into perspective, a small passenger plane like the Cessna Skyhawk weighs about 1,640 pounds and can only carry about 900 pounds of payload, a little more than half the plane’s weight. 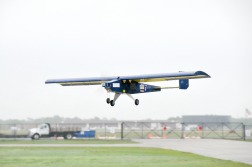 Payload is where other schools fell short. Many of the other teams overestimated the payload their planes could carry, causing them to lose their balance and crash at the first turn during flight.

The competition planes must be able to perform in any weather condition, regardless or rain or wind-resistance, much like what you would expect of a commercial airplane. These are design and problem-solving skills that premier engineering employers like Lockheed Martin and Boeing are looking for from job candidates.

“The whole competition is very suited to a real-world scenario as far as students going into their careers,” Reding said.

Still flying high after their plane’s recent performance, club members say that next year they plan to break into the top three worldwide at competition.