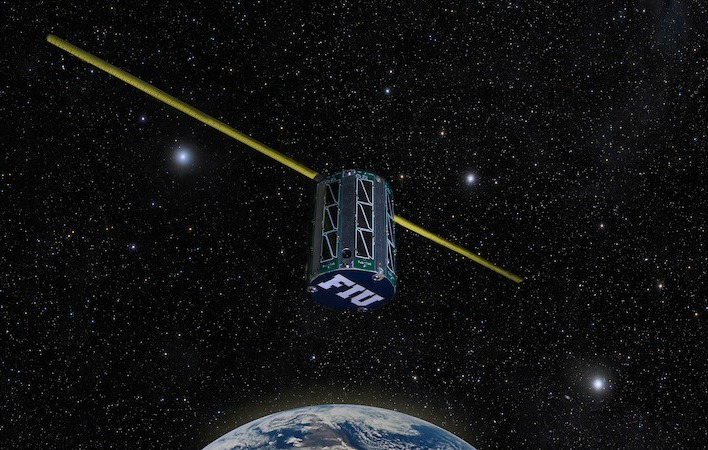 Students from FIU’s College of Engineering and Computing helped design and build a satellite that will launch into space in 2015.

If you teach, taught or parent a student, you know that it can be a challenge to keep students actively engaged in learning.

But John Escobar, a parent who was teaching robotics and technology in an after school club at David Lawrence Jr K-8 Center, found a creative way to bring together students of all ages and propel their interest in engineering.

In 2012, Escobar was inspired by a school banner that declared the “sky is the limit.” He read about technologies to send to space, including weather balloons and rockets. He then became intrigued by the idea of building a satellite.

The cost for a small satellite payload was $8,500. Escobar knew that a public school would not be able to easily fund such a venture, so he shared his idea with his professional colleagues and was able to find a sponsor, Optomize Inc., from Weston, FL. This company offered to fully fund the project.

After some discussion, a group of interested students from DLK8 were selected to participate. But along with DLK8 science teacher, Laurie Futterman, and principal, Bernard Osborn, Escobar recognized that this was a highly complex project that would require additional more expertise. Students from the neighboring high school, Alonzo and Tracy Mourning High School, were asked to join.

A short time later, it became clear that a more sophisticated level of engineering was necessary to truly ‘launch’ this project. Futterman then asked FIU College of Engineering and Computing’s Department of Electrical and Computer Engineering to become involved. Department chair Shekhar Bhansali and Senior Design Instructor Wilmer Arellano enthusiastically agreed and with that the partnership transformed into a tiered educational triad. It became the first satellite project in the United States in which the whole educational spectrum participated together to build and have a satellite.

After two years of electronic design and redesign, trials and successes with radio communication, image processing, and programming, the project was completed.

“I still remember our first trip to David Lawrence Junior K-8 in August 2012. I recall somebody saying something along the lines ‘We are good now. We have the experts.’ Where we, and more importantly, where the students of these three institutions became really expert, is at taking challenges and making them reality, “ Arellano says.

On Nov. 21, the students joined a standing room only crowd of guests, including FIU President Mark B. Rosenberg and Miami-Dade County Public Schools Superintendent Alberto Carvalho, to show the completed satellite, which will be launched in mid-2015.

The students proudly showed off the device and watched anxiously as Superintendent Carvalho took it in his hands to examine it more closely. “These hands have held a few babies,” Carvalho joked. “I’m sure I won’t drop this one.”

When launched, the satellite, which looks like a coffee can and sports retractable measuring tapes from either side, will make an entire revolution around earth every 90 minutes and will be visible for around five minutes at every revolution. It will send back pictures, speed and temperature readings. “This project involved many areas of electrical and computer engineering and it has the tight constraint that weight must not be greater than one pound. The satellite includes tiny computers called microcontrollers, antennas, transmitters, receivers, modulators and demodulators. It will fly at an altitude of around one million feet with a speed of 17,500 mph,” Arellano notes.

“In addition, the satellite will broadcast a call sign identifying FIU, Mourning High, and DLK8 to the entire surface of the planets multiple times, enabling radio operators everywhere to say that our signal has been heard.”

“I have enjoyed every stage of this project and, after looking at these middle and high school students enjoying science and technology while they learn, I had this nostalgic feeling of wishing to be a middle or high school student again,” Arellano says. “But not at any middle or high school—I would want to be at David Lawrence Junior K-8 and Alonso and Tracy Mourning Senior High, because something special is going on there.”