FIU’s College of Engineering & Computing was well represented at the 13th Annual Torch Awards Gala on Saturday, March 8. Professor Gustavo Roig was honored with the Outstanding Faculty Award, and FIU alumnus Carlos Duart, president and CEO of Duart Enterprises Inc. and a member of the Dean’s Advisory Council for the college, was presented with a Distinguished Alumni Award.

The black-tie optional event honors FIU’s outstanding alumni and more than 500 were in attendance at the J.W. Marriott Marquis in downtown Miami.

In the spirit of the Roaring ‘20s theme for the evening, FIU President Mark B. Rosenberg came dressed in a snazzy white suit. “No, I’m not here for a KFC commercial,” he joked on stage. “I’m here for you tonight in white because I’m ready to celebrate and enjoy all the accomplishments of our Torch awardees.” 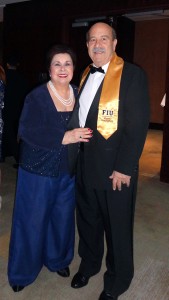 Professor Gustavo Roig was honored with the Outstanding Faculty Award

This year’s Torch winners hailed from the White House and Abu Dhabi, the Netherlands and the Cayman Islands. They included a mayor and a regional bank president, a veterinarian and CEO.

Roig has received three of the most distinguished awards that can be given to a faculty member of FIU in teaching, service and research, including the Presidential Award in 2003. His most outstanding accomplishments and contributions are in human potential development – efforts that have been praised by local, state, national and international organizations. Roig has a bachelor’s degree in electrical engineering from the University of Puerto Rico as well as master’s and doctorate degrees in electrical engineering from the University of Florida. 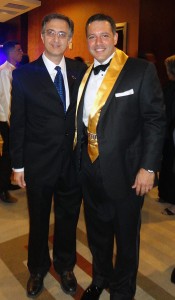 Duart ’94, ’99, is a Miami native and holds a bachelor’s degree in accounting and a master’s in taxation from FIU. He is married to Regina Duart, his wife of 20 years, and is a certified public accountant in the state of Florida. Duart is chairman and CEO of Duart Enterprises Inc., whose various operating companies specialize in transportation engineering, emergency management, and bridge fabrication and construction. Other industries include insurance, real estate, technology and retail operations. He is a director of the FIU Foundation, member of the Dean’s Advisory Council for the College of Engineering and Computer Science, and steering committee member of FIU’s first federally funded University Transportation Center. Duart is an FIU Entrepreneur Hall of Fame inductee and FIU Medallion recipient. His other civic activities include member of the Executive Republican Governors Association, Clinton Global Initiative, Democratic Governors Association and the American Red Cross.

This year, in an effort to make connections across the Panther network, a student was assigned to escort each of the winners through the evening. “Listen to the students. Please take time to hear their stories,” Rosenberg urged the alumni. “I can assure you they will be as impressed by their stories as they are by your story.”

Rosenberg’s message for the evening was all about making an impact. He brought on stage the FIU Telebot, an invention of the college’s Discovery Lab that has captured international media attention. When completed, the Telebot will allow disabled police and military personnel to serve as patrol officers. He spoke of FIU’s commitment to strengthening the local public school system, in particular the university’s partnerships with Miami Northwestern senior High and Booker T. Washington High.

A few months ago, a reporter asked Rosenberg what he obsesses on most in his work.  “I made it simple,” he said. “At FIU we have been obsessing on impact.”

Impact on students. Impact on the community. “We have an obligation,” he said, “to leave it better than we found it.”

Associate Vice President of Alumni Relations Duane Wiles shared the story of an alumna named Belinda, a single divorced mother of two. “She was at a major cross roads in her life,” he said. “You know what she did? She decided to go back to college at the same time that her kids were in high school.”

Her family questioned that decision, Wiles said. “You know what she did? She walked across the stage at FIU at the same time her two teens received their diplomas. That’s the FIU spirit”

In the same way, the Torch winners also refused to take no for an answer, Wiles said. “Sixteen awardees who went beyond what was expected.”

The biggest applause of the evening was saved for longtime FIU volunteer and donor Gerald Grant, recipient of the first-ever Alumnus of the Year award. Most recently, he organized the weeklong Panther Alumni Week, which brought more than 100 graduates back to campus for a week to interact with students.

“This is the least I can do to repay FIU,’ Grant said of his volunteering time. “But for the guidance and support of my professors, this kid from Liberty City has been successful.”

Watch a video of the event here.