Dwayne McDaniel, a senior research scientist at FIU’s Applied Research Center (ARC), was helping his son with his science homework when he came across a familiar face—his boss. 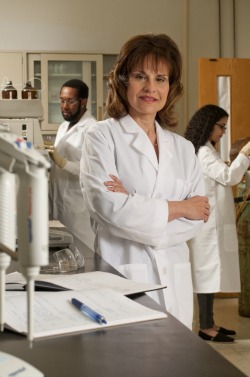 Inés R. Triay, the new executive director of ARC, was featured in McDaniel’s fifth grader’s science textbook as one of the important women of science. In Triay’s vision for the future, fifth graders everywhere would open up their textbooks to read entire chapters about prominent FIU/ARC scientists.

Triay had been a visiting U.S. Department of Energy scholar supporting ARC’s DOE Workforce Development Program when she accepted the position of executive director. In her new role, Triay will continue to enhance and strengthen a pipeline of women and minorities in STEM (science, technology, engineering, and mathematics) careers as well as further develop ARC’s emphasis on focusing research efforts to solve real-world problems. “It is very important for future generations to understand the importance of science and mathematics and the key role they play in our quality of life,” she says. “Scientists and engineers, by the nature of our work, sometimes become focused on narrower and narrower points of the work and we neglect to explain the context of that work. You need to say why you’re doing what you’re doing in order to be successful into attracting students in science and math. We must immerse them into solving problems and seeing the impact.”

Triay has had decades of experience in tackling real-world problems as a scientist. She had been the DOE’s seventh assistant secretary in the Office of Environmental Management, appointed by President Barack Obama and sworn in May 2009, leading the largest, most diverse, and most technically complex environmental clean-up program in the world. Prior to Triay’s executive positions in Washington D.C., she served as manager of DOE’s Carlsbad Field Office in New Mexico and held several key positions at Los Alamos National Laboratory. Triay received her bachelor’s degree in chemistry and her doctorate degree in physical chemistry from the University of Miami.

As for Daniel’s son, he thought it “was very cool and was impressed” that his father knew someone in his textbook. But “I don’t think he understood the complete level of importance,” Daniel adds.

With his father and brother settled in Miami, Jorge Riera always knew that someday he would want to live and work in the city. He just didn’t expect his move to happen the way it did.

Riera was a distinguished biomedical engineering researcher at Tohoku University School of Medicine when the area was hit with a devastating earthquake and tsunami in March 2011. The earthquake, which would turn out to the fourth largest earthquake since 1900, caused considerable damage to Riera’s lab.

However, also in 2011, Ranu Jung, chair of FIU’s Department of Biomedical Engineering, identified diagnostic imaging and sensor systems as one of her department’s cluster areas of growth. That just happened to be one of Riera’s research areas as well.

After a six-month sabbatical at FIU, Riera joined the faculty full time in 2012. “Dr. Riera has a passion for scientific discovery. It was this passion that first caught my attention,” says Jung.

Now associate professor of biomedical engineering, Riera is continuing to delve into the research of brain imaging and neurodegenerative diseases, focusing on solving inverse data from effect to cause. His lab is developing strategies to integrate different modalities of brain imaging to understand multicellular signaling in the neocortex, trying to determine how you can draw useful data in an extremely puzzling and yet critical part of the anatomy. “Imaging captures pictures of brain functioning, but you have to understand how that picture is actually generated. If you don’t interpret it well, you are not getting the full picture,” Riera notes.

Prior to joining FIU, Riera had spent 10 years in Japan, working in one of the world’s most foremost facilities for the study of brain disorders using pre-clinical rodent models and brain mapping tools. Riera is originally from Cuba and graduated with a degree in physics from University of Havana. He did a portion of his doctorate work at the Pitie-Salpetriere Hospital in Paris and received a doctorate in physics from University of Havana.

“Riera’s personal life story began in Cuba, was influenced by an education in France, and was molded by an immersion into the people and culture of Japan. He offers our students a world-view and a guidepost for following one’s dreams,” says Jung.