Motorists driving on the new flyover from eastbound State Road 836 to northbound State Road 826 in Miami travel over one of the first smart highway bridges in South Florida and one of just a handful in the state.

The bridge, which opened to traffic in January, drew the attention of FIU engineers, who approached Miami-Dade Expressway Authority last year with the idea of installing sensors in the bridge to monitor its health.

Nakin Suksawang, a professor of civil and environmental engineering and a researcher with Lehman Center for Transportation Research at FIU’s College of Engineering & Computing, along with four students, installed 96 stainless steel embedded strain sensors in critical locations over six segments of the bridge prior to the concrete being poured.

The sensors deliver data monitored by Suksawang at FIU about differential stresses and the bridge’s behavior, including creeping, shrinkage and cracking that can be caused a number of factors, including variations in temperature and weather. These changes could indicate problems in the concrete or the pre-stressed cable tendons that hold the segments together. A research study of this kind has never been conducted in South Florida, an area known for high temperatures.

“We are looking to see what we can learn from our bridge,” said Alfred Lurigados, director of engineering and deputy executive director at the Miami-Dade Expressway Authority, which is co-funding the project with the Florida Department of Transportation (FDOT).

Part of a move in recent years toward the use of smart technology, sensors typically have been used in signature bridges, including the Sunshine Skyway Bridge in Tampa, but they rarely have been deployed in ramps and flyovers. 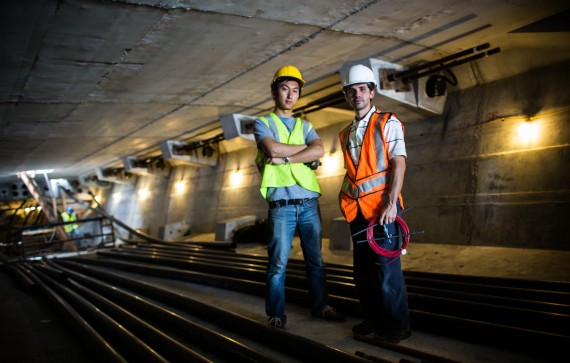 The SR 836 to SR 826 flyover carries 15,000-25,000 cars a day. The segmental bridge uses large segments of concrete that are placed together and compressed. Unlike steel, however, concrete does suffer from some long-term changes, Suksawang explained.

“It’s like a sponge. As a sponge loses water it tends to shrink, and it’s the same thing with concrete. Shrinkage can occur, as well as creeping. When you apply a load over time it will start creeping to a smaller portion,” Suksawang explained. “As such, some of the pre-stressing force in the bridge is lost and the bridge could potentially sag. Some bridges, if they are designed improperly, could end in a disastrous collapse.”

Trying to identify structural problems in a bridge through visual inspection is a practice plagued by inconsistency and expense. Installing sensors at critical points in the structure allows engineers to conduct continuous electronic monitoring of bridges.

“So the best thing to do is to actually put instrumentation in the bridge and monitor it,” said Suksawang. He believes the data collected will help engineers design better bridges and assist them in the evaluation of existing bridges.

“The term we use is structural health monitoring,” he said. “It’s like we’re monitoring the pulse of the bridge. The system does provide early warning and information that could prevent catastrophic failure.”