A team of students from FIU’s OHL School of Construction won the Associated Builders and Contractors (ABC) 12th annual Student Chapter Construction Management Competition during the 2012 ABC EdCon and Expo in San Antonio, Texas.
FIU was one of 25 teams of students from colleges and universities across the nation that competed for more than $6,000 in cash and prizes. It’s the second time FIU has brought home the coveted title of Construction Management Champions.

“This competition gives the nation’s top construction management students a glimpse into the real world of construction, as well as an opportunity to showcase their talents,” said 2012 ABC National Chairman Eric G. Regelin, president of Granix, LLC, Ellicott City, Md. “The students’ dedication and determination throughout the competition was an inspiration to all.”

“The whole process pulls together everything you’ve been going to school for,” said team member Ken Fabel. “As a student you get to experience everything you’ll have to do in the real world.”

Fellow students Nabil Nisr, Charles Hall and Grant Glenewinkel joined Fabel on the team, along with alternate member Nikki Forbes. Each team member had a specific role mandated by the competition, including safety engineer, project manager, cost estimator and superintendent for the project, which involved the renovation of an elementary school in Baltimore. Faculty advisors Jose Faria and Ayman Morad coached the team.

“We’re just really very proud of their accomplishment,” Morad said. “They put in a lot of effort and hard work, and it paid off.”

For the students, the competition stretched over two-and-a-half months. Back in February, the team received a set of drawings, specifications and RFP for the project. They had to form a construction company and prepare a cost estimate, a project management plan, a project schedule, a site safety plan and an economic inclusion and workforce development plan. Once they got to San Antonio, the panel of judges gave them changes to the scope of work, as well as quotations from different subcontractors to revise the initial proposal.

After submitting their revised proposals, the team learned they had made the top eight. Next, they had to answer questions live from the panel about management and safety issues and how the changes they made would impact the project’s cost and schedule.

Irtishad U. Ahmad, director of the OHL School of Construction, said FIU earning the overall championship in this prestigious national competition for the second time since 2006 is testament to the high quality education the students are receiving.

“With this year’s victory I can confidently say that the OHL School of Construction can be considered as one of the top five construction programs in the country,” Irtishad said.

“The professors prepared us for this competition and they put a lot of work, semester after semester, into bringing out the best in their students,” Nisr said.

Forbes said she encouraged her teammates to think positively about their chances of winning the competition. “Do not worry about other schools,” Forbes told them. “We are dominating now.” 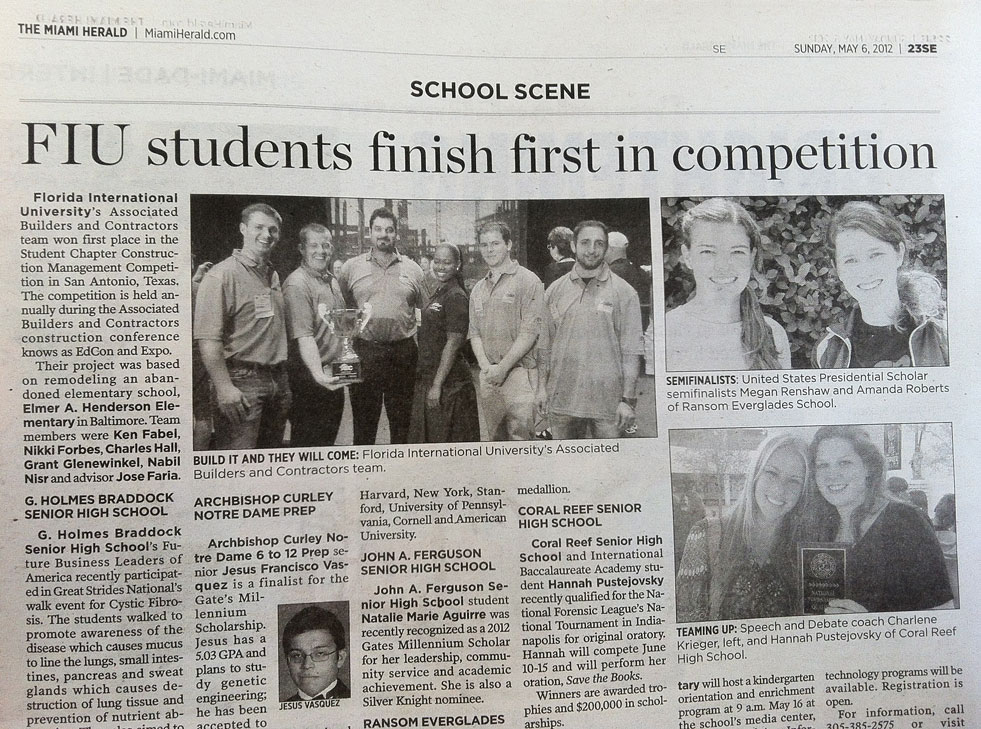