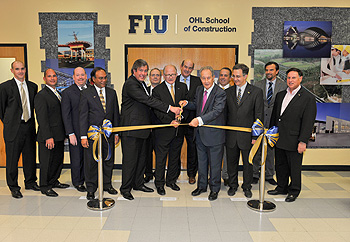 Global construction multinational Obrascon Huarte Lain (OHL)  has partnered with the Florida International University’s College of Engineering and Computing to create the OHL School of Construction, the first named school in the history of the college.

The OHL School of Construction’s dedication ceremony took place on Tuesday, March 20, 2012 at the Engineering Center. The ceremony was followed by a lecture by President and Chairman of the OHL Board of Directors Juan-Miguel Villar Mir titled “OHL Group – A Case Study in Entrepreneurial Success.”

“FIU’s program will move forward at a faster pace with OHL’s investment in and commitment to mutual values of excellence, sustainability, diversity, progress, economic development, and quality of life,” said Villar Mir, who acquired Obrascon when the company was on the verge of disappearing in 1987 and, through a series of mergers, restructured the activities of the company and created the OHL Group which is now a multinational traded on the Bolsa de Madrid with sales in the order of $ 6.3bn. “We look for the OHL School of Construction to become one of the top programs of its kind in the U.S. and abroad.”

Since its establishment in Spain in 1911, OHL has evolved into one of the world’s largest construction corporations, leading major projects in more than 50 countries. In alignment with the expansion priorities of OHL, the partnership with FIU will address the demand for diverse construction industry professionals in Latin America and the Caribbean. 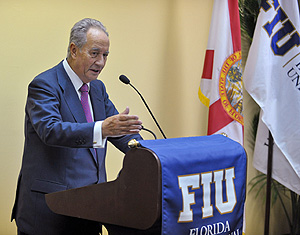 “With a global presence in the Dominican Republic and Panama, and strong executive and online offerings, our construction program is already Worlds Ahead,” said Amir Mirmiran, Dean of the FIU College of Engineering and Computing. “This generous gift will place the OHL School of Construction in an elite group of national and international peers.”

Established in 1973, the construction management program at FIU has educated more than 1,500 professionals. Graduates are employed by all major construction companies in the region.

FIU President Mark B. Rosenberg noted that the new school’s mission is perfectly aligned with the university’s community engagement mission.

“At FIU we view ourselves as problem solvers for the community – in South Florida and around the world,” said Rosenberg. “As the economy improves, OHL’s support will ensure that our school is poised to provide the kind of education that will allow our graduates to not only take good jobs, but to create good jobs.”

OHL is one of world’s leading construction and concessions groups proudly offering 100 years of experience. Over the recent years, OHL has been growing in a dynamic manner, with its international activities resulting in the multinational group that it is today with a remarkable presence in fifty countries across five continents.

Currently ranked 21st among the largest international contractors by ENR, OHL is a global leader in building hospitals and railways. OHL is also ranked the world´s eighth largest transport infrastructure concessionaire (PWF) because the company operates a toll road network stretching more than 3,000 miles in more than 20 PPP projects around the globe.

OHL is present in the United States from 2006 with the acquisitions of Community Asphalt and The Tower Group in Miami. Nowadays, the holding company OHL USA includes also Arellano Construction, Stride and BCA in Florida, and Judlau Contracting in New York. Together, the OHL firms are prepared to handle virtually any construction project in the United States, by the standards of quality and innovation that always have characterized the OHL Group.